The Luckiest by Mila McWarren 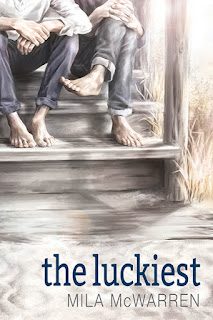 I welcome Mila McWarren to the blog today!


Right around the time of our 10th anniversary, I went to see Love Actually with my husband – this was long enough ago that it was a new theatrical release at the time. By the time the movie was over, I was pissed – like, actually, really completely pissed off. I still get pissed off when I think about that movie.

The reason is because the film advertised itself as being about all kinds of love stories, but what it left out is what happens when it's easy and it works and you're so damn happy to keep falling in love with each other. As somebody who was celebrating 10 years of marriage and who was really very damn happy about it (it's been 21 years now and I'm still disgustingly happy), I felt cheated and a little left out – you might remember that the only longterm couple in the film is not doing particularly well.

I have always felt like there is a lot of beauty and pleasure in not just the coming together but the staying together – the kind of sweet, everyday happiness that that kind of endurance can bring.

The problem, of course, is that it can make for a REALLY boring story. We like first times, we like stories about getting together, and the will-they-won't-they drama is the driving force behind a romance. There needs to be peril, and threats – the best romances, the ones we know best and that have set the patterns for the genre, are the ones where our heroes overcome obstacles both external (geography! Other people! Work!) and internal (fear of vulnerability and intimacy! Being an immature jackass!) to be together. (Okay, I admit it: I just described the plot of Pride and Prejudice.)

I spent a lot of time trying to avoid that in this book while still maintaining enough tension for it to be an engrossing, interesting read. I wanted it to feel inevitable and comfortable and glowing, but something that you got to watch happen, a warm, glorious pleasure that you got to share in just by following along. The goal was to build a romance that didn't have to overcome massive, overwhelming obstacles, but that was still interesting to watch settle into place. Just like, I think, most of the relationships that most of us eventually settle into. Life is hard enough, and I think most of us just want to be happy without running a relationship obstacle course. We want people that fit into our lives, not people who we have to earn.

It is… okay, honestly? It's really fucking hard to do that! I'm not sure how well I hit the mark; I'm also not sure how much people want to read that. But I want to read it, and I really, really wanted to write it.

And so that's how this story is different from the rest. When we read a romance novel, we all know they're going to end up together – it's the rule of the form. This story isn't interested in the things that keep people apart. This story is interested in the things that draw them together, inexorably and inevitably, and in watching what happens as both of them settle into that and learn to build something new together.

I hope you'll give it a try, and I hope you like it!

Thanks for having me on Book Reviews, Rants and Raves today!

When New York-based memoirist Aaron Wilkinson gathers with his high school friends to marry off two of their own, he is forced to spend a week with Nik, the boy who broke his heart.

As they settle into the Texas beach house where the nuptials will be performed, Nik quickly makes his intentions clear: he wants Aaron back. "He's coming hard, baby," a friend warns, setting the tone for a week of transition where Aaron and Nik must decide if they are playing for keeps.

Excerpt:
Aaron finishes the song and Stephanie snatches the mic out of his hand, crooks her finger at Nik and launches them into a reprise of their performance of "Dancing on My Own" from the homecoming weekend they all spent here at the house back in senior year. Stephanie still has questionable rhythm and tragic pitch—she loves to sing, which is why they have a karaoke machine in this house, but it's one thing she will admit she doesn't have much of a gift for—but there's a reason Nik majored in music at The University of Texas, and his voice has come a long way.
Somehow, this deliberate throwback to a memory that was never anything but happy seems different than what Aaron has just done. He sits on the sofa, flanked by Alex and Jasmine, hating them both a little for participating in it even while he smiles. Nik dances—how can you not, with this song—but he still watches Aaron, gives him a little head-tilt during the chorus, and it's charming and devastating and infuriating.
Jasmine leans to murmur, "Oh, I see how it is."
"Oh, shut up."
"You might not be desperate, but I'm not sure about him. He's coming hard, baby."

About the author:
Mila McWarren grew up in Texas, but has happily made her home on the East Coast for the last decade. In her day job she works as a social scientist and has spent the last 10 years developing her fiction writing online. She lives with her husband and their two kids. When she isn't using working, writing, or hanging out with her family, she likes knitting and watching television, because they go together like peanut butter and chocolate, two of her other great loves.