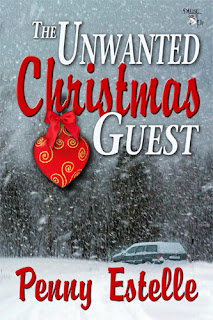 Elizabeth McMurphy is an up and coming high powered attorney and is after vengeance involving one of the richest and most powerful families in Colorado. Steve York is an obnoxious reporter that thinks the ice queen has gone too far and does all he can to get under her skin.
When one of the worst blizzards in history, hits Colorado and leaves a hurt Steve York, stranded with Elizabeth in a mountain cabin, she must decide to either take care of him, or throw him out to fend for himself.

Excerpt
“What’s going on here? Where the hell are my pants?”
practically jumped out of her skin. Steve stood in the bedroom doorway, wearing only some tight fitting pink sweats.
“I found you after your car went nose to nose with a tree.” She crossed her arms. “The question is, what were you doing up here in a snowstorm? Were you coming up here to spy on me?”
“Jesus, my head hurts.” Steve groaned and sat at the kitchen table. “And don’t flatter yourself.” He brought up his hands to rub his eyes and push on his temples. He started to say something when a giggle and a round of undistinguishable sounds caught his attention. Steve stared at the little girl, a whisper of a smile on his pale face. “You have a daughter?”
She chose to ignore the question. “Again, Mr. York, you were headed…where?”
“I was going to see some friends in , then on to Steamboat to spend the holidays with my family.”
“You figured on taking a short cut on ?”
“Basically,” he muttered. “I had a phone in my pants pocket…” Steve looked down at the pink sweats. “Yours, I presume?” At her nod, he asked with a smirk, “And you’re the one that took my clothes off?”
“Junior, my neighbor.”
“If you’ll allow me to use your phone, I’ll call Triple A and get myself and my car out of your life.” He reached over to Katy and she latched onto his finger, the brightest smile ever illuminating her sweet face.
quickly picked her up, as if he would contaminate her by his touch.  “Phones are out.”
“Internet?”
“Nope.”
“How the hell do you live here?” he asked irritably.

Email ThisBlogThis!Share to TwitterShare to FacebookShare to Pinterest
Labels: Muse It Up Publishing, Penny Estelle, The Unwanted Christmas Guest