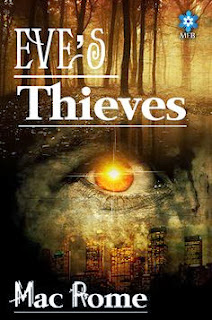 A group of women have been the victims of some unusual thefts. They have had, not items, but aspects of their physical being, such as their heights, builds and youth stolen via dark magic. To stop the thieves and restore themselves, they band together to defeat the loose confederation known as Eve's Thieves. To do it, they must battle an ancient evil, deal with betrayal … and face the darkness within themselves. But they soon find that little is as it seems. Can they trust anyone -- even each other? Who is the leader of the group known as Eve’s Thieves? What will it take to stop her … and will any of them survive to do it?

Nevaeh was checking online for jobs, now that she was again able to enter the work force, when her phone rang. She pulled it out of her pocket and looked at the number, something she’d gotten in the habit of doing lately. There was one frequent caller whose calls she no longer was taking. But she didn’t recognize this number, and there was no caller ID display, so she answered. “Hello.”

“Hello, Nevaeh? This is Linda Younger,” said the familiar voice from the phone.

“For someone named Linda Younger, you sure sound like Wynda Dancer,” Nevaeh replied flatly. “How are you, Wynda?”

“Fine.” There was an awkward pause before Wynda said, “Peri tells me you’re not answering her calls or texts — or anyone else's from the team, for that matter.”

“What team?” Nevaeh said. “There is no team. There’s only Peri and whatever version of her plan is left now. And apparently that plan involves keeping secrets within the ‘team.’”

“I know,” said Wynda. “But lives depend on it, including yours.”

“Well, I don’t know how much she wants her life saved right now,” Nevaeh said. “I don’t know if she’s going to make it as it is.”

“What do you care? You’re dead, remember?”

“Well, from what Maryska has texted me — she’s the one person in the ‘group’ whose texts I’ve been reading, by the way — Lilka is in deep grief, and her mind seems to have gone a bit over the edge. She does nothing but sit in the apartment with the lights out and the curtains shut, listening to 3 Doors Down and Chicago —”

“Yeah,” Nevaeh said. “She spends all day listening to your music. She’s taken to wearing only black, and only outfits that have a pocket over the left breast so she can keep your note over her heart. She even pins it to her nightie so she has it there overnight.”

“But she sleeps in the buff,” Wynda said.

“Not anymore,” Nevaeh said. “Not if it means being separated from the last she has of you. The only other thing she does is call Peri a couple of times a day, asking when the next mission will be. It seems to be the only thing she looks forward to.”

“Then why don’t you?” What’s the big secret? Why are you hiding this from people, and especially the woman you love? I mean, look, I don’t get this whole ‘gay’ thing, but from what I saw before, you two really loved each other.”

“Love each other,” Wynda corrected.

“Well, you’ve got a funny way of showing it,” Nevaeh said. “And, assuming we all survive this, how do you think Lilka’s going to feel when she finds out the truth? Will she forgive you that easily? Will your love be undamaged? Will it even survive at all? She’s wounded pretty deeply, in some of the worst grief I’ve ever seen. How will she react when she finds out the hell she’s being put through was all a lie?”

Quietly, Wynda asked, “Is anyone with her?”

“Maryska’s staying with her. I don’t think Lilka’d buy any food or pay the bills at this point if someone wasn’t staying there. Maryska’s sleeping on the sofa. Lilka goes to the bedroom at night and hugs your pillow — the one you used as a bed when you were shrunken — to smell your scent on it so she can go to sleep with a little bit of you.”

Wynda’s lip quivered as she asked, “Why aren’t you talking to anybody, Nevaeh?”

“I promised Peri I’d keep your secret,” Nevaeh said. “With the way I feel, the only way I can do that is to not make contact. And, until this stupidity is over, I want nothing to do with Peri. This plan is putting Lilka through hell, and I can’t believe you’re a willing part of it.”

“Look, we really need you for the next take-down,” Wynda said.

“Well, you’ll have to do it without me. I’m out of the team until you stop putting Lilka through this nightmare. Oh, and ‘Linda?’ I don’t want to talk to you again. When Wynda Dancer is available, I’ll talk with her. Until then, goodbye.” Nevaeh hung up without giving Wynda a chance to reply.

Wynda sighed. She looked over at Peri, who had listened in on Wynda’s side of the conversation. “Well, that could have gone better,” the former Olympian said to the detective.

“Why are we doing this again?” Wynda asked.

“You already know,” Peri said. “Whoever the mole is, she’s feeding our battle plans to Eve’s Thieves, directly or indirectly. My source says it’s direct. We need a strategy they won’t see coming. They think you’re dead.”

Mac Rome is a lifelong resident of the Great Lakes region of the United States. He’s experienced life in the Appalachian foothills, along the Ohio river and in the flatlands of the former Great Black Swamp, and in large cities, small towns and rural areas. He’s a student of ancient lore and mythology and a lover of cultural exploration, history and dialects. He writes fantasy, science fiction and romance.