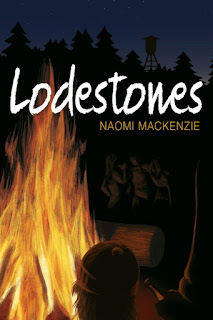 I am happy to welcome Naomi MacKenzie to the Book Blog today, talking about her latest release, Lodestones.

Hi! Thanks for having me. It's great to be here!

I'm a Canadian from the east coast, currently living in the Toronto area and pining for the sea. I've been writing for myself since I was very young, mostly poems and short stories. I have several novels on the go at all times, but Lodestones is my first completed novel. It involves a large cast of high school and college-aged characters seeking out and attending a lake party on the last weekend of summer.

1)      Tell us something about your character’s friends.

Robin is the sort of person who has many friends, but very few close ones. His two best friends are Charlie Katz and Christa Ito, who are opposites in a lot of ways. Charlie is sweet and empathetic, sometimes to a fault. He holds back his true thoughts and feelings if there is even the slightest chance that they will hurt his friend. Christa says what is on her mind. Even if her words might cause injury, she feels it is more important to be direct and honest than to coddle. They are a good balance, and Robin goes to them with problems when he needs one or the other: absolute truth, or hugs and distractions.

Robin has a serious sweet tooth, and his favourite meal is crepes or pancakes, smothered in maple syrup. He loves nearly all desserts, but especially plain white cake with chocolate icing, which was his grandmother's specialty. He snacks on chocolate covered raisins and Smarties, or sometimes raw almonds when he's on a health kick.

3)     What activity does your character absolutely hate?

Jogging. He hates most activities that lead to profuse sweating, but he would do pretty much anything to avoid jogging.

4)     What other author’s book do you think your character would be good in?

That's a really tough question. I'd have to say Stephen King. Only because of Robin's love of the horror genre. He knows all of the twists and tricks, so he'd have a good chance of being left alive.

The 80s, God knows why. If you asked anyone who was an adult at that time, they'd have a hundred and one horror stories, but I was really young so none of that registered. It was all Star Wars and Glamour Gals and She-Ra to me. Plus, the music was good. And the hair was big.


Blurb:
On the eve of a new school year, several groups of college students cross paths as they seek out a secret end-of-summer lake party—including Robin and Charlie, two inseparable friends who discover of the course of the twenty-four hours that their relationship is something much deeper than simple friendship.

Excerpt:
Larry holds up the flyer to study the map Florence drew. Barry is leaning to look at it, too, when it's ripped from between Larry's fingers.
A greasy man in a campus security uniform stands over them with a pinched expression. His faded nametag reads: Ron Anderchuk. "Another one," he all but growls. "Where in heck did you get this, boys?"
Barry tries his best to look innocent. Which isn't all that hard, since he knows nothing.
"Found it on the ground," Larry lies.
"Uh-huh, uh-huh," the security guy says. "Extra trouble for littering." He glares hard at the paper for nearly a minute before looking back at them. "You do know parties like this are illegal, don't ya, boys? And frowned upon by this here establishment." He raps his knuckles on the table. "I think it best you stick around here this weekend. That would be best, don't ya agree?" He widens his beady eyes while he waits for their assent.
Barry looks to Larry. Seeing him nodding, he mimics the gesture.
The security officer's answering grunt sounds disbelieving. He mutters as he walks away; the flyer with their map is gripped in his fist.
"What are we—"
Larry holds up his hand, stopping Barry's question in its tracks. "Not to worry; I have a photographic memory. I've got the map in here." He taps a fingertip against his temple.
"Even after all of that? And we do have another problem, if Florence is to be believed."
Larry hums and strokes his chin. He picks up Barry's tray and they walk  to the windows. The orientation officers are indeed spread across the entire expanse outside, handing out pamphlets and organizing games of lawn bowling and oversized croquet. The entrance to the student parking lot is completely blocked.
Barry should throw in the towel, admit defeat and convince Larry to do the same. And he would, if not for one thing. The one detail that has roped him into the excitement over the lake festivities fully and completely is Kate Zimmermann, captain of the Dicaroon Seadogs field hockey team. Barry was looking through the school's website while Larry was plotting behind him and he caught sight of her picture. He informed Barry that she was one of the girls who was carrying the van's bench seat into her dorm room and invited him to the party early that morning.
Barry is in love with Kate Zimmermann. He has been since seeing her on the Dicaroon University website the previous summer. Well, he's in love with the image of her and her red hair and blue eyes and adorable freckles that are so voluminous that they connect on her face. He has dreamed of red-haired kids calling him Daddy and hitting balls with sticks. Possibly. And she's throwing the party, so even if Barry will never get up the nerve to speak to her should he live for a thousand years, he has to go. For his future dream-wife.
"Well, then," Larry says. He sets Barry's lunch tray down on the bussing station and rubs his hands together. "I guess we are in need of a foolproof plan."
"A stratagem," Barry says. He feels immediately foolish for being such a huge dork.
But then Larry grins at him. "Ooh, yes, I like that. A stratagem."

Indiebound:  http://www.indiebound.org/book/9781941530375?aff=InterludePress
About the author:
Naomi MacKenzie is a writer and photographer from the eastern coast of Canada. She considers herself a Maritimer first and a Canadian second, or so she told the standardized testing people in essay form during the eleventh grade. She enjoys vegan baking, walks in the woods and, contrarily, hiding from the sun. Lodestones is her first novel.

Where to find the author:
Connect with Naomi MacKenzie at http://naomimackenzie.com/; on Twitter at @_naomimackenzie and on Facebook at Naomi MacKenzie.
Goodreads Link: https://www.goodreads.com/book/show/25837081-lodestones
Publisher: Duet Books, the YA imprint of Interlude Press
Cover Artist: Cover Design by Buckeyegrrl Designs
Cover and Interior Illustrations by Abby Hellstrom

9-Sep Hearts on Fire, Boys on the Brink Reviews

17-Sep Wake Up Your Wild Side, Scattered Thoughts & Rogue Words