Werewolves of Brooklyn by Brad Vance 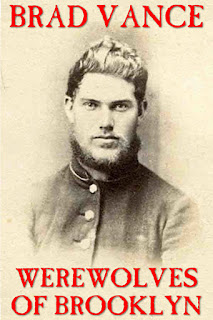 I'm excited to have Brad Vance on the book blog, talking about his latest book, Werewolves of Brooklyn!

1)      What is your least favorite part of the publishing/writing process?

Oh, definitely the “post pubbing depression.” That time after you publish when you’re totally certain you’ve written your last book, nobody’s gonna buy it, it’s the glue factory for you. I’m still here, alive and kicking, but I feel that way every time.

2)     As an author, is there one subject you would never write about? What would it be?

I’d never rule anything out. I’m planning a novel about a “good cop” who’s caught up in a racially charged shooting, and his love interest is a biracial guy. Almost everything in M/M is white-on-white, so I know that might be financially risky. Also, talking about race at all is a minefield today, especially when it’s a white guy doing the talking. But I get bored easily, I need to take risks. I’d quit writing before I ended up writing the same book over and over.

I haven’t really taken a big risk since “A Little Too Broken,” a novel about a guy who loses his lower legs to an IED in Afghanistan, and his coming out process, and his relationship with an HIV+ guy. That could have been wretchedly maudlin and awful, but I pulled it off. I donate 50% of all gross royalties from that book to veterans’ organizations, and I’ve been able to raise $4,200 so far for Iraq and Afghanistan Veterans of America, Wounded Warrior Project and Puppies Behind Bars, which trains service dogs for vets.

3)     When did you first realize you wanted to write?

When I could spell. The first thing I started doing was making up my own stories. I always knew this was what I’d be doing with my life.

It’s about a three month process for me to write a 70k book. As I’m writing one, I’m cogitating on the next, at least subconsciously. For instance, while I wrote “Werewolves of Brooklyn” I let my mind ponder what to do next with Marc and Jesse in the sequel to “Would I Lie to You?” I didn’t give it conscious thought, but I know from experience that when I set down to write the outline, it’ll pop out of the oven.

Germany. I’ve set a few of my stepbrother stories there, and as always, I did my research on settings and the society and the nightlife, which made me want to go there. Berlin sounds like an amazing, dynamic place right now, and there’s so much history, good and bad, and I’m a huge history buff. So I’m going next summer. I’m already using Duolingo to learn German.

Blurb:
Darien Mackey wasn’t looking for an adventure. For ten years, he’d been happy living in Brooklyn, working as a butcher in the same job, living in the same apartment, dating some “nothing-special” guys. Until one night his buddy Jacob talked him into taking ayahuasca, the soul-changing drug. And Darien had a vision…of a wolf, its all-too-human eyes on him, its paws on his chest, its enquiring mind in his own…
Darien Mackey is changing. He’s more confident, more assertive, hungrier, hornier. And his world is changing around him – his job, his home, his beloved Mechanic’s Library all falling victim to the predations of unscrupulous developers, bent on demolishing the old Brooklyn he loves and replacing it with a forest of condos. But he’s no longer a passive observer of his own life, and as this thing, this power, grows inside of him, he resolves to fight back, to preserve the way of life he loves.
And he’s not alone in the fight. The Lipsius Preservation Society of Brooklyn stands ready to assist in the battle, even though it seems like a bit of a joke to Darien, with its King and its Duke, Marquess, Earl and Viscount.
But there’s nothing funny about his growing attraction to Albeus Finley, King of this mysterious Court. And when slumlords and condo-mongers start to die mysterious, violent deaths at the hands of savage animals, Darien begins to realize that something is afoot in Brooklyn – something supernatural.
And it’s afoot in him, too…

Excerpt:
The wolf’s eyes were lava-yellow with hate. His growl and his snarl were meant to terrify Darien, to freeze him in his tracks, prepare him for his death.
Then something rose up in Darien, rage, frustration, primal energy. And his own lips curled, his own growl met the enemy’s.
The Duke retreated a pace, taken aback. Darien felt sharp pains in his palms and looked down. Where he’d had fingernails, he had claws, long and sharp, and the fists he was making were digging them into his flesh.
He smiled, exhilarated, wild. He lunged and snapped at his enemy, knowing that his canines had become…literally that, elongated spikes ready to tear out a neck.
Darien’s ears were ringing, something surging in him beyond mortal feeling – like testosterone but stronger, more powerful, the smell of victory, immortality.
“The King is mine,” Darien declared. “And I am his.”
He knew he’d taken a step from which there was no turning back. He was the King’s man, the King’s consort. He would open to Albeus and take him, and be taken by him, and he would be alone no more.
He was one of the pack.
And it curdled the blood of men for miles around when he raised his face to the full moon, and howled.

About the author:
Brad Vance writes gay romance, erotica and paranormal stories and novels, including the breakout hits "A Little Too Broken" and "Given the Circumstances." Keep up with Brad at BradVanceErotica.wordpress.com, email him at BradVanceErotica@gmail.com, and friend him on Facebook at facebook.com/brad.vance.10.

Rafflecopter Prize: One of three e-book copies of ‘Werewolves of Brooklyn’ by Brad Vance

a Rafflecopter giveaway
Posted by Unknown at 5:00 PM