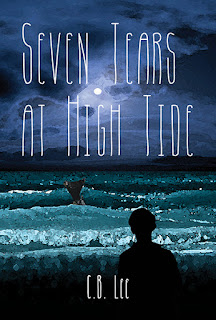 I’m excited to have C.b. Lee, author of  Seven Tears at High Tide, on the Book Blog!

Hi there! Thank you so much for interviewing me today, I'm happy to be here.
I'm C.B., I'm a bisexual woman from California and some of my favorite things are writing, hiking, and traveling. I'm a first generation Asian American and I'm excited to be introducing some characters whose backgrounds are similar to my own. My first novel is Seven Tears at High Tide, is all about falling in love and dealing with the consequences of a making a magical wish.

1)      Favorite thing about building your own world?

Bringing an idea to life! It's incredibly satisfying to write in the fantasy genre to create the rules of your universe. Anything can happen, but that can make things complicated very quickly because then you have so many options, and it can be different to know where to start. I like to base my magic on elements of reality, like for instance one of abilities that Morgan has as a selkie— his enhanced sense of smell, is based on a seal's innate ability to recognize others by scent.

2)     What inspired you to write your first book?

It was in a transitional period in my life after college when I was on a road trip on my own; it was kind of a melancholy trip but I enjoyed it, driving on my own, camping, hiking by myself, seeing the coast. One blustery day I'd stopped by the Piedras Blancas rookery and watched the seals sun themselves on the beach. There was one seal that wasn't laying with the others, just sitting a distance away, watching the waves, and I thought there could be a story here.

I really enjoy writing in present tense. It's part of my style to put the reader directly in the scene as it's happening, constantly. I definitely like to keep a balance of heart and humor within a story, even if there are heavier themes, and keep the tone light and enjoyable to read.

4)     Who are some of the authors that influenced you to write?

Diane Duane, Terry Pratchett, J.K. Rowling, and Neil Gaiman most definitely, for their intricate worlds of magic. Lawrence Yep and Amy Tan were also a huge influence on me for being one of the few voices in literature when I was a child to create amazing characters and stories I could identify with.

5)     What are some jobs you’ve held? Have any of them impacted your writing? How?

Ah, quite a few. I've was a youth outdoor program instructor at a few nonprofits and also at a California state park, and after that I was in academia for awhile, working on my PHD in the sciences, and now I work in graphic design. I think all of my experiences have definitely contributed to the way I see the world and how people interact with one another, things that definitely do go into my writing. When I worked with children and teenagers in the various outdoor programs, I learned so much about listening, about people letting themselves enjoy things and really discover so much about their world at the same time.

My favorite thing— one of the nonprofits was aimed at getting low-income and at-risk youth out hiking and backpacking— was seeing kids absolutely stunned at this world. One particular memory of mine was a short hike in a local park and there was a trickling stream bubbling over rocks and these kids— twelve, thirteen or so, on the cusp of growing up, having lived in the city all this time, were just fascinated, turning rocks over, touching the water, watching it flow. And one of the other instructors thought this was hilarious because they were quite well traveled, and were finding it funny that these kids thought this little streambed and bit of green was so spectacular, and they said something to the point where this wasn't a scenic trip, and that they were looking forward to a "real" trip. It hit me then, that this was beautiful to these kids, and I thought it was beautiful too, and it wasn't a matter of experience on better


Blurb:
Kevin Luong walks to the ocean’s edge with a broken heart. Remembering a legend his mother told him, he lets seven tears fall into the sea. “I just want one summer—one summer to be happy and in love.” Instead, he finds himself saving a mysterious boy from the Pacific—a boy who later shows up on his doorstep professing his love. What he doesn’t know is that Morgan is a selkie, drawn to answer Kevin’s wish. As they grow close, Morgan is caught between the dangers of the human world and his legacy in the selkie community to which he must return at summer’s end.

Excerpt:
They wander into the house, wipe their wet feet on the welcome mat, climb up the stairs and giggle as they pass Ann’s bedroom. She’s dancing with her headphones on, oblivious to the open door, swaying to the beat.
In Kevin’s bedroom, he quickly scrounges up some clean shirts and shorts. “Here, you can wear this,” he says, handing an outfit to Morgan and then ducking into his bathroom to change. He peels off the wetsuit and hangs it up in his shower, then leans his surfboard carefully against the wall, eyeing the crack. He’ll have to fix it tomorrow.
When he returns, Morgan is holding onto the wet board shorts, wearing the outfit Kevin gave him. He looks curiously at the rock collection prominently displayed on Kevin’s bookshelf. “These are beautiful,” he says.
“Here, I’ll take that,” Kevin says, holding out his hand for the bedraggled board shorts to hang in his shower. He’s certain now that they’re the ones from the lifeguard’s lost and found. Kevin’s starting to worry that Morgan doesn’t have any other clothes, but he doesn’t know how to bring it up. Money can be a touchy subject.
Morgan holds Kevin’s favorite specimen, a piece of green olivine on basalt. Kevin once almost convinced Ann it was an avocado roll—it certainly looks like one, bright green speckled with sesame seeds, wrapped in dark seaweed.
“That’s from Mexico. My family went on vacation to Baja last year, and I got that out of an old volcano.” He tries his best to describe the sweltering heat and the excitement of finding geodes and cracking them open with a hammer. Morgan listens in rapt silence as Kevin talks about the find and tilts the olivine so it catches the light. He sets it back in its spot behind its label, slowly so as not to disturb the other specimens, and Kevin is quietly pleased with Morgan's careful appreciation.
“I changed my mind,” Kevin blurts out.
“About what?”
“I do want this to be a date. For us, to do that,” he says, blushing. “I like you. A lot.”
Morgan’s face breaks into a bright, happy smile.
“And what do we do differently, for this to be a date?”
Kevin can feel the heat on his cheeks. “We can hold hands, if you like. Um, or kiss, if you want to. But we don’t have to do anything you don’t want to. I’m fine just hanging out and watching a movie with you.”
Morgan tilts his head and steps closer. “I want to,” he says, not specifying what, but Kevin knows immediately.
It’s just the quickest brush of lips, but Kevin feels it all the way to his toes. A warm curl of excitement blooms throughout his body, and Morgan’s mouth is warm and wet against his. It’s not like any kiss he’s had, chaste and sweet and over in a second, and yet his heart is still pounding after Morgan leans back. He’s close enough for Kevin to be able to count the eyelashes dark against his cheek.
Morgan ducks his head and asks, “Was that okay?”
Kevin's a little dazed, but he finds his voice. “Yeah. Yeah, that was great.”

Meet and connect with C. B. Lee:
C. B. Lee is a bisexual writer, rock climber and pinniped enthusiast based in California. Lee enjoys reading, hiking and other outdoor pursuits. Seven Tears At High Tide is a first novel.

22-Oct: Emotion in Motion, Kimi-Chan, Elisa - My Reviews and Ramblings