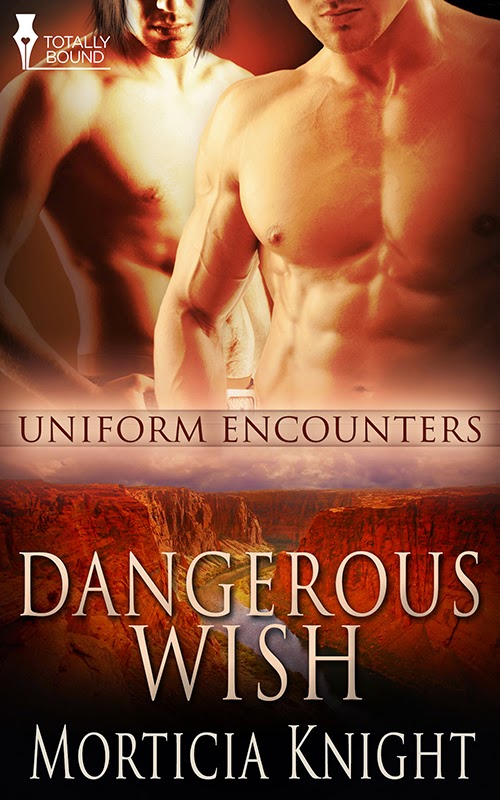 Although part of a series, all installments can be read as standalones. For more information, visit Morticia Knight’s author page at Totally Bound: https://www.totallybound.com/author/morticia-knight#books
Set Ablaze (Uniform Encounters 1)
Hunky fire chief Eric is out of the closet after twenty years of marriage. Can he find true love, or will a spate of arson fires destroy his chances with Tom, the sexy young firefighter?
Arresting Behaviour (Uniform Encounters 2)
Native American Quinn and Detective Jake come from two opposing worlds. But when opposites attract, the result is explosive.
Lust Emergency (Uniform Encounters 3)
The new ER doctor is smoking hot, and the exotic African American paramedic can't keep his eyes off of him. Tricky relationships and subterfuge at a Phoenix sex club almost drive a permanent wedge between the two, but a bombing at City Hall changes the endgame.
Guarded Desires (Uniform Encounters 4)
A sexy young National Guardsman, a snarky bear of a DEA Agent and a vicious Mexican drug cartel. Someone’s going to be sorry.
Secret Fire (Uniform Encounters 5)
Police officer Zach and Fire Marshal Daryl would be perfect together—if they would ever quit fighting long enough to find out. A devastating fire and the secret behind it almost keeps them from getting what they really need—each other.

Cover Artist: Posh Gosh
Publisher: Totally Bound
Blurb(s):
Love is a dangerous emotion that EMT Jared won’t risk. But it looks as though a sweet and sexy National Guardsman is about to make him wish for that—and much more.
EMT Jared Li loves his job, his friends and clubbing. There’s nothing like a night of fun getting glammed up, throwing on some heels and shaking his ass to the latest Britney tune. Life is all about having a good time with as many hot guys as possible.
Dan Harrison has been in the National Guard for about six months and out for not much longer than that. At twenty-two, he’s somewhat innocent, a little shy and not interested in meaningless hook-ups. One night at a karaoke bar changes everything for him when his fellow Guardsman Joseph introduces him to his friend Jared. Dan’s never met anyone like the luscious twink who’s filled with so much life and laughter.
A night of passion shakes them to their very cores. Jared really likes Dan, but doesn’t want to get caught up in any type of exclusive thing. Dan wishes there could be more between them, but is willing just to be friends in order to remain near the androgynous stunner.

Hanging out strictly as friends proves to be almost impossible for them both. Not only does Jared continuously lust after the muscular soldier, but he’s also falling for the caring and compassionate man. Dan’s every sex fantasy stars Jared in one of his daring club outfits, but his heart is what really matters and it’s already been lost to Jared.
A traumatic event breaks down the barriers between them and gives them the chance to be together the way they both want. But after Dan is called up by the Guard to assist at a natural disaster, the same bravery that Jared admires in Dan might be the final thing that separates them forever.

Fact #5 - Guardsman Dan Harrison is young, but he knows what he wants. A good man to share his life with.

Excerpt:
His heart trip-hammered when said angel glanced in his general direction and strolled toward their table.
Oh hell no. Going to faint. Definite fainting.
The prospect of getting shot while he’d been at the border helping in the mission to take down a ruthless drug cartel had been somewhat scary. The gun battle he’d faced later on, fighting that same gang, had been even more intense. But neither held the same terror as the prospect of having to form a complete sentence in the presence of the most gorgeous man he’d ever seen up close.
Dan jumped when Joseph grasped his upper arm.
“Awesome! Jared finally made it.”
Right at that moment the beauty that he now knew to be the Jared halted before them. Joseph sprang to his feet and embraced him. Never had Dan been more jealous of anyone in his entire life.
“Dan, this is the guy I wanted you to meet. Jared, this is Dan, he’s the one that saved Stephen’s life.”
Soooo embarrassed.
He began to rise to shake Jared’s hand, but before he’d barely had the chance to lean forward, Jared had grabbed a nearby chair then planted himself on it. Right next to Dan.
“Oh my fucking God, you’re that Dan? I attended Stephen that day—it’s how Joseph and I met—so I know how hardcore all of that was. Damn.”
He gave Dan a flirty smile, batting his eyelashes a little. It seemed like an unconscious movement.
“Wow. Joseph didn’t tell me I’d get to hang out with a brave and sexy soldier tonight.”
I’m done. No more breathing for me. Breath all gone.