Have a Little Faith in Me by Brad Vance 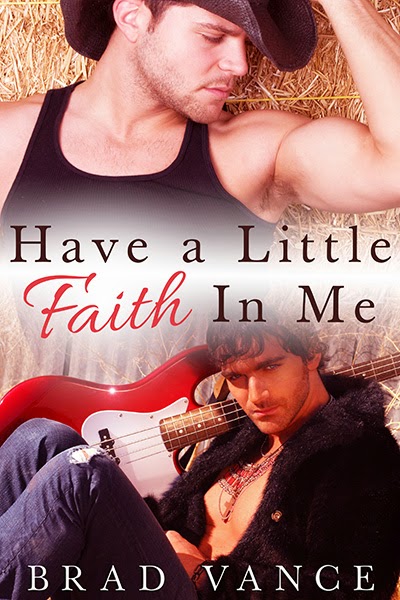 Goodreads Link: https://www.goodreads.com/book/show/24738368-have-a-little-faith-in-me?ac=1
Author Name: Brad Vance
Author Bio: Brad Vance writes gay romance, erotica and paranormal stories and novels, including the breakout hits "A Little Too Broken" and "Given the Circumstances."
Where to find the author:
Keep up with Brad at BradVanceErotica.wordpress.com, email him at BradVanceErotica@gmail.com, and friend him on Facebook at facebook.com/brad.vance.10.
Publisher: Self-published
Cover Artist: Aubrey Watt
Blurb(s):
When Rocky met Dex, it was hate at first sight. Country superstar Dex Dexter represented everything that budding rock star Rocky McCoy had left behind him in the Deep South – the religion, the homophobia, the hypocrisy, the lies. And Rocky represented everything that Dex had denied, had turned away from, had refused…

When Rocky met Dex, it was love at first touch. Double booked in the same slot on the main stage at CrossFest, they fought for the microphone like two dogs fighting over a bone. And when their hands met…

Rocky has had enough. “No more falling for straight guys. No way. No matter how hot. Especially if the ‘straight guy’ looks to me like a major closet case.”

Excerpt:
Rocky picked up the Gibson Hummingbird.  Chris Cornell played one of these.  What more did he need to know?
He knew exactly what he wanted to play.  How many times had he played this song, how many times had he stretched his voice, discovering his own vocal range.  The notes of “Like a Stone” flowed from his fingers in a waterfall, and the words were a flock of birds banking wildly in front of the cascade, flirting with disaster.
He came to the end, the roaring finish, his eyes closed as he sang the epic wave of notes in the last word of the song, “alone.”
He’d only ever played the song when he was alone with Korey, who was no cheerleader.  Korey would nod, say, “Good job.”  And then tell him where he missed something.
When he was done, he opened his eyes.  His new friends were speechless.  “Was it okay?” he asked doubtfully.
“Holy fucking great mother of God,” Rick gasped.  “Who the fuck are you?  Where did you come from?”
Rocky smiled.  “Under a rock.  I’ve been living under a rock.”

Rafflecopter Prize: 3 copies of the E-book

Email ThisBlogThis!Share to TwitterShare to FacebookShare to Pinterest
Labels: Brad Vance, Have A little Faith in Me