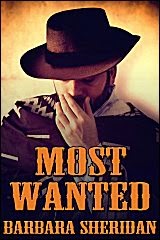 I am so excited to have Barbara Sheridan on the blog today talking about her novel, Most Wanted.

Most Wanted  is definitely one of my favorites with characters that I can never truly let go. Part of that reason is because they tie into the world of my first professionally published book and two sequels. The other part is because none of those books  might have come about had it not been for the combination of my inner history nerd and my late father's love of TV and movie westerns.

Back in the day "Old West" would bring to mind Wyatt Earp, The Texas Rangers and the likes of John Wayne battling stereotypical "bad guy Indians".

But one day when wandering through a book store I came across a western hsitory magazine with a cover story featuring a group I'd never heard of-- the Choctaw Lighthorse (the nation's tribal police force in the Indian Territory days of Oklahoma).

From their inception in the early 1820s until 1860 Choctaw Lighthorsemen were often judge, jury and executioner of tribal lawbreakers. They also shared the enforcement duties of Indian Territory with the U.S. marshals out of Fort Smith, Arkansas. However, Lighthorsemen had no jurisdiction over white criminals or any natives who might have committed crimes with white cohorts.

In The Rise and Fall of the Choctaw Republic Angie Debo wrote of the Choctaw Tribal Council having to appropriate funds to secure legal counsel for officers who found it necessary to kill law breaking United States citizens and were themselves charged with murder in the Federal court.

This double standard lead many tribal officers to also seek commissions as deputy U.S. marshals themselves. And that is where my deputy Jon Sauvage and his cousin Lighthorse Captain Jason Hillhouse come in.

Boston born and bred Tim Dwyer doesn’t relish the thought of giving up Eastern comforts for life in the rough-and-tumble West. But when he finds himself with no job, little money, and no place else to go, he accepts a position at his cousin’s weekly newspaper in the Indian Territory. When his cousin and new editor cook up a roving reporter assignment, Tim learns that spending a mere week in the life of U.S. Deputy Marshal Jon Sauvage won’t ever be enough to satisfy his needs.

Choctaw lawman “Savage Jon” Sauvage has spent his entire adult life content with chasing wanted men and taking his pleasures wherever and however he can. But once he’s roped into letting a big city reporter tag along with him on a manhunt, Jon soon suspects that Tim Dwyer might just capture his heart.

Other titles in the Hillhouse Family series
http://barbarasheridan.com/mf-titles/hillhouse-family-series/


In celebration of History Week Part I, I will be giving away an Ecopy of my second novel, Disappear With Me, which will be available from Amber Quill Press on May 31. The prize will be delivered after that date. (Note, this is independent of the Giveaway for the Hop Against Homphobia and Transphobia and Biphobia) 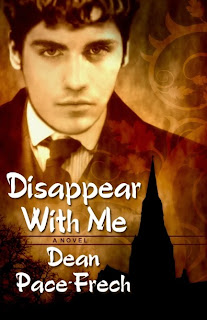