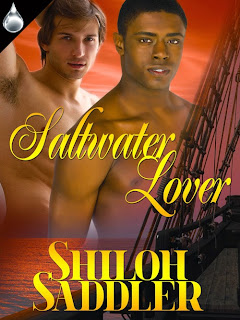 Interracial Historical Romance
I’m a relatively new author as I have only been published since 2013. My first story, Saltwater Lover, is still my favorite. Set in the early 1800s it is the romance between a slaver and one of his captives. All the research I did for that novella spawned my growing interest in the Trans-Atlantic Slave Trade and the lives of slaves once they lived in America. As you can imagine many journals, narratives, and newspaper articles will make you cry in anguish and scream in anger. However, I’ve read some touching stories as well. My fiction is not trying to lessen the suffering of those past, but to let readers knows kindness and even romance bloomed under this difficult circumstances.

Of course, the interracial romance during this time adds tension to the story. Not to mention being gay during this time was extremely frowned upon. I like that as an author—the automatic uh oh. It has spawned so many story ideas I fear I will never have time to write them all.

I’m part of the monthly Sexy to Go anthologies published by eXcessica. Each volume continues the serial of a slave, James, and a plantation owner’s son, Daniel. The two lovers narrowly avoid being separated when the estate is sold at auction to pay back debt after Daniel’s father dies. Forced into poverty they must work hard to survive. Each story can be read as a stand-alone, but they are better read as a set.

This is the first serial I have written. It is a new experience for me. Each short piece must contain action, romance, and some sort of hook. It is a different writing formula than the novels I am used to. In a way it is a challenge, and I like challenges.

Here is a very short excerpt from Lust in Bloom (Sexy to Go, volume 3)

Not one to back down, he rose to the bait. “And what will happen if I do regret my decision? Since you seem to be able to see into the future.”

“You’ll lose this farm and coming begging to me to save your sorry ass.” Whitaker flashed a smug smile before kicking the mount in the flank and galloping to his side of the property line.

“Next year,” Daniel grumbled, “I’m putting up a fence.”

James ambled over to him cheeks puffed, he looked like he was trying hard not to burst out laughing. “Wouldn’t keep him out, sir. He’s like a fly drawn to buttermilk.”

He hated being called sir, but there was no way of knowing if Whitaker was still in earshot. They walked a fine line of social expectations. It would catch up with them one day.

“Guess I’ll just have to make the buttermilk unappealing.”

“Can’t do that,” James said in a low, husky voice. “It will always be appealing.”
“He has something up his sleeve,” Daniel grumbled. “I don’t trust him. We need to be careful.”

Daniel folded his arms across his chest. “He gave me a warning, but I won’t be bullied. Under no circumstances will I go running to Whitaker for assistance.”

“Looks like we have to help ourselves then,” James said. “Best keep picking till it gets dark.”

“Dark,” Daniel said with a sigh. “That’s several hours away.”

“How observant of you, sir,” James pointed out and they both chuckled. His lover always knew how to get him to relax.

James put a hand on his shoulder. It was more of a friendly than intimate gesture but Daniel’s mind went to other places quickly. How long had it been since they’d had sex?

James gave him a knowing look. “Tonight we can relax properly.” He spoke it as a statement not a question.

In celebration of History Week Part I, I will be giving away a copy of the first four volumes of Sexy to Go. Volume 5 will release May 31st.

Comment to win on this blog post for Shiloh's giveaway and the Disappear With Me giveaway that's been going on all week! 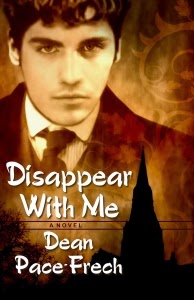