Claimed by Desire by Skye Jones 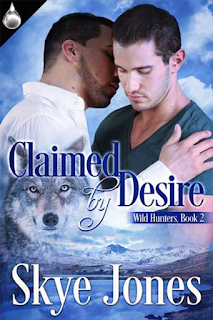 I am excited to have Skye Jones on the blog today talking about her latest release, it's a good one!

Hi there, thanks so much for having me.

Claimed by Desire is a M/M shifter story, but it has a bit of a different setting and dynamic to many shifter books. A lot of shifter stories have details of the pack dynamics going on, whereas for most of this story there isn’t a focus on that. This is because Dylan, the hero, is a bit of a lone wolf at the start of the book. He lost his mate and pack during an attack on them, and ever since has been unraveling bit by bit while he plots his revenge.

He has taken himself off to a farm in the wilds of Wales, where he grew up. One day he hires on a new farmhand, Aeron, and their attractions sparks a change in Dylan. But it is one he resists out of loyalty to the mate he lost.

The book is set in the UK so there is a liberal sprinkling of Brit speak, although I tried to keep Dylan’s dialogue fairly neutral. He is a Brit, but he’s a wolf shifter first and foremost, and he spent many years in the US and then traveling. There’s touches of Brit humor in the book, too, in the banter between the characters.

There are also some vamps, which I think are different from most vampires. They aren’t handsome and sexy. You wouldn’t want to be near these guys in a million years. I went back to old tales of vampires from Eastern Europe and places like Greece for inspiration for the vampires. Plus films like Nosferatu, where the creature is hideous and skinny and decayed looking. I mention the film in the book, as a nod to those old horror masters. I do love horror and might one day be tempted to write one, and I think there are some little elements of that in this. But it is ultimately a romance and that plays the main role in the story.

I hope readers enjoy the story, and Dylan and Aeron.

Dylan Roberts returns to the Wales of his birth a changed man after the violent death of his mate. Having turned his back on being a bounty hunter and sworn off love for life, all he wants now is revenge.
When he meets Aeron Lombardo, his new farmhand, Dylan resents the intense attraction that blossoms between them. But Aeron won’t stop pushing and soon things take a hot and sexy turn.
As passions rise, danger rears its ugly head. Now Dylan and Aeron must choose whether to separate or commit to one another totally. Will Dylan take the final step and claim his new mate?

Excerpt:
“Turn around.” Dylan’s low voice echoed in the bathroom.
He did as instructed, skin goose bumping in the chill air. Thick fingers touched either side of his torso and gently pressed down into his lower back. “Does it hurt?”
He shook his head.
“Turn back around.”
He faced the front and watched as Dylan moved large hands over his torso, gentle but firm. He pressed a little more on the right hand side. “What about here? Hurt at all?”
“No.” He exhaled a shaky breath. No matter how much he told his dick not to take interest in the proceedings, he became more and more aroused at every touch.
Then Dylan did something so strange it snapped him out of his fog of desire. The man leaned in towards Aeron and sniffed him.
“Jesus.” Aeron took a step back, butting up against the sink behind him. “Did you just smell me?”

Rafflecopter Prize: $25 gift card to one winner, two e-copies to two other winners

a Rafflecopter giveaway
Posted by Unknown at 7:39 AM