Herc's Mercs: Once a Hero by Ari McKay 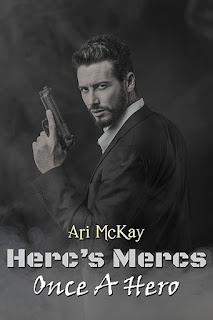 Blurb:
Ezra Levin retired from Hercules Security to pursue his dream of being a private chef. But when the life of his gorgeous employer, Judge Mason Whittaker, is threatened, Ezra quickly realizes that once you’re a Merc, you’re always a Merc.

Excerpt:
Mason shook his head. "I wasn't paranoid enough," he said. "You were. You knew it could get bad. I didn't believe it -- didn't want to believe it. It almost killed me."

"I did not want to believe it either. I hoped I was wrong, but my instincts were telling me something bad was going to happen. Now that it has--" Ezra's voice broke, and he brought Mason's hand to his cheek, clinging tightly. "I cannot be objective. When I saw you there, saw all that blood..." He shook his head, and Mason thought he saw the glimmer of tears in Ezra's eyes before Ezra looked away. "I cannot be merely an employee. I tried. If you want me to recuse myself, I will."

"What?" Mason was confused, but he could see Ezra's pain, and he reached over with his free hand, touching Ezra's cheek. "Are you saying you want to leave Jamie and me?"

"No!" Ezra stared at Mason, wide-eyed. "No, I don't want to leave. But if you want me to remain only your employee, I cannot do that any longer. I tried to maintain my professional distance, especially after I overstepped so badly, but I cannot do it after this."

Ari McKay is the professional pseudonym for Arionrhod and McKay, who collaborate on original m/m fiction. They began writing together in 2004 and finished their first original full-length novel in 2011. Recently, they’ve begun collaborating on designing and creating costumes to wear and compete in at Sci Fi conventions, and they share a love of yarn and cake.

Arionrhod is an avid costumer, knitter, and all-around craft fiend, as well as a professional systems engineer. Mother of two human children and two dachshunds who think they are human, she is a voracious reader with wildly eclectic tastes, devouring romance novels, military science fiction, horror stories and Shakespeare with equal glee. She is currently preparing for the zombie apocalypse.

McKay is an English teacher who has been writing for one reason or another most of her life. She also enjoys knitting, reading, cooking, and playing video games. She has been known to knit in public. Given she has the survival skills of a gnat, she’s relying on Arionrhod to help her survive the zombie apocalypse.


Where to find the authors:

Rafflecopter Prize: E-copy of ‘Herc’s Mercs: The Bigger They Come’


a Rafflecopter giveaway
Posted by Unknown at 7:39 AM