Surrounded by Crimson by Lexi Ander 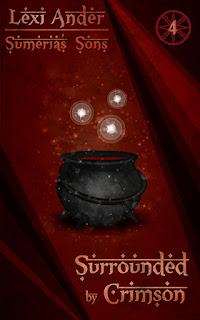 I am excited to have my friend, Lexi Ander, back on the Book blog today. I asked her what inspired her to write this story. Here's what she had to say:


I think everybody knows what inspired Sumeria's Sons as a whole. But for this particular installment of the series, what inspired it was reader comments on other mpreg stories. When I finally wrapped my head around the fact that Tristan would be pregnant regardless of what I wanted, I sat down and asked myself what I liked to read when it came to mpreg? What did I want to see? What did other readers want? Then I read a slew of reviews for other mpreg books to see what was expressed.

The easiest answer to the question was people wanted to see the baby being born. Most of the time, the "birth" took place off page. Sometimes the whole pregnancy took place off page, and at times that was understandable because the dude would become pregnant and there wasn't an explanation of how that would really work. Stories like that gave the impression the baby would come out the same way the seed was planted, which really, no one wants to see. Off the top of my head, the two best mpreg stories that I've read that had plausible on page births was Tymber Dalton's Acquainted With the Night and Eresse's Sacred Fate. Both of them are very different but didn't shy away from the how from start to finish.

In Songs of the Earth and Dreams of the Forgotten, the why Tristan had to become pregnant and then how of the pregnancy would progress was established. With Surrounded by Crimson the actual birth is shown. Is this the only thing that happens in the book? No, it isn't. The birth is interwoven with the overall plot, so don't expect the babe to be born and then set off to the side to continue on with the Tristan and Ushna's dilemmas. The infant won't disappear to be trotted out at the end for the happy family picture. The wee one has a part to play in the rest of the series and has a surprise or two of his/her own.

Thank you for stopping by and reading. I wish you good luck in the giveaway!

Tristan has agreed to bond with Ushna but there is still much to do and returning to Tribe Enkidu puts everyone on edge. Tristan is being stalked like prey all the while fighting depression as he mourns the loss of Nikita and enduring a battle of wills with the Elder Council over his birthright. The pleading of his adoptive daughter only adds still more stress to the situation.

Stumbling onto a secret prison while searching for Ushna leads Tristan to risk everything to free a lost God. But breaking the tie to his Flame has more repercussions than Tristan knew and the assistance of a forgotten Goddess and a centuries old lover may not be enough to save him.

Excerpt:
Ushna was out of the car and greeting his parents before I unbuckled the seatbelt. Hami wasn't as tall as his son but he was wide, very wide, barrel-chested with a set of deltoids on him the size of small children. His dark hair was cut above the ears and I'd never seen the man without at least three days growth of facial hair. It looked good on him. That kind of scruff made me resemble a bum.

Donya was tall and lean, one of those women who had a natural sway when she walked. Her blue-black hair fell to her waist in thick glossy waves. Her skin was a deep almond, darker than her husband's or son's, and her bright, emerald-green eyes were large and expressive.

They both greeted Ushna with festive exuberance, and why not? I'd kept him away from them for a very long time. I observed them for a moment over the hood of the SUV. Hami picked his son up in a bear hug, laughing loud and boisterous. Donya took his face between her palms as she gazed deeply into his bi-colored eyes—eyes that were forever changed by me. At that thought, I wondered how they truly perceived me. My stomach rolled with anxiety-induced queasiness.

With all the grace of someone my size, I made my way into the house, leaving Ushna to his family reunion. I had hoped we wouldn't see them until after the children were born. I'd entered the home stretch of my pregnancy. Even with the ring of illusion, I had a hard time hiding my condition. Early in my pregnancy, Gregori had fashioned a ring of magic, creating the illusion that hid my continually growing stomach and constructed a normal appearance.

A pregnant male wasn't something we wanted to explain to humans. With the looming threat of assassination, if my identity was discovered, we thought it best to continue to keep my birthright a secret until after the children were born. So I'd continue to wear the illusion even though the ring wasn't much help now. The giveaway was in the walk and the way I stood. People could see there was something different by how I held my body and it couldn't be helped. I was able to hurry, in spurts, and then I lumbered like an elephant—very National Geographic.

Neesie followed me into the kitchen. She was dressed differently than what I'd become accustomed to. Gone were the combat boots, black jeans, and white tees. She wore a pale blue silk blouse, a pinstriped pencil skirt, and knee-high black stiletto boots. She appeared fierce in a whole new way.

"Why didn't you wait and greet Ushna's parents?" she asked.

With a plate in hand, I inspected the cold cuts tray that sat on the kitchen counter. I was starved and wanted something quick to eat before everyone came in. When I didn't answer Neesie, she took the plate from me and started placing fresh vegetables on it.

"I thought I'd give them some time to catch up," I finally replied. It wasn't a complete lie. "They haven't had their son to themselves in quite some time. They don't need me hanging out in the background."

Neesie pinned me with her golden-brown gaze. "That is such bullshit and you know it. What's the real issue?"

I quirked a smile at her. "You know I love ya?"

"Yes, and you're the one who called me for dating advice because you suck at subtle. Your 'hey moron, get your hands off my sister' ranked right up there."

"I can't help it if Mr. Octopus Arms was oblivious to his audience."

"Go ahead and keep playing that song because I know you still refer to him as Lonnie Fucking-Fowler. Before you walked into the house, your face turned green and you practically sprinted in here."

"Spill, jackass." She shoved a full plate into my hands and a chair under my ass. Neesie glared at me but her expression was filled with concern.

"Fine, you tyrant. I wanted to make a good impression. I wanted to be able to show them that I am a strong partner and worthy of their son's love and devotion. But right now I'm huge, and miserable, and swollen, and hungry. Why did you give me carrots? You know I hate carrots. You're trying to torture me, aren't you? I'm an elephant, not a rabbit. I get like peanuts or something, not Bugs Bunny hand-me-downs." I threw the carrot at my cackling sister. The woman was not remorseful.

I threw another carrot at Neesie before turning to see who called for me. I swallowed a curse as I faced Donya. She stood in the doorway, her large green eyes soft and liquid as she searched my expression.

"Ma'am?" Embarrassingly, my voice cracked like I was fourteen years old.

"How can we not be proud of you, son?" Donya crossed the room in a smooth glide and gently took me in her arms. "We've always been proud of you, Tristan, don't ever believe differently." Tentatively I embraced her in return and ignored Neesie's sniffles.

a Rafflecopter giveaway
Posted by Unknown at 5:37 AM