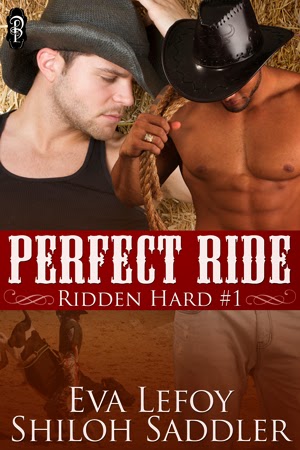 If you read and liked A Place to Call Their Own, you might like this modern day cowboy romance.

Blurb:
Professional bull rider Garrett Anderson lives for the next town, the next trophy and his next ride. When he rolls into Sheridan, Wyoming, the last thing he expected was to meet a cowboy like Cole—a man who corrals his heart and leaves him aching for a love he never realized he’d been missing.
Surrounded by hate, Cole Richards wasn’t prepared for Garrett’s passion or the longing their night together leaves him with. But when he’s shot, and stuck in his hospital bed, Cole watches every second of Garrett’s disastrous ride, and is heartbroken when the battered and bruised bull rider leaves town.
Attacked again and knee-deep in trouble, Cole wants only Garett at his side. But can his bull rider trade fame and fortune for a lifetime with his one perfect ride?

Excerpt:
“There he is.” Cole put a foot up on the lower slat of the fence and rested his arms on the upper. “Take a good look at him while he’s standing still. You won’t see him like this in the ring.”
He eyed the bull with respect. He stood out from the rest of the top ten. Spitfire was big, over sixteen hundred pounds of pure, cream-colored power, topped with foot-and-a-half long horns. The way Spitfire eyed him and began to dig at the ground like he wanted to test the limits of the temporary fence sent a shiver up his spine. He’d have to be careful with this one. He gave Cole a sidelong look and studied the man as he watched his bull.
He liked the sandy-blond stubble dusting the man’s chin and cheek. Liked the way his lips were wide and meaty and showed a bit of wear at the edges, betraying either late-night trysts or the tendency to chew on them as he worried. Garrett voted for the latter. Oh, he could picture Cole bent over taking it from another man easily enough, but the thought made him instantly jealous, so he squelched the notion. With nowhere to set his still full plate, he perched it on the top of a post. “You keep a pretty close watch on him?”
Cole nodded. “He’s a rebellious one. An escape artist, too. A little too smart for his britches. Someday he’ll end up in the slaughterhouse if he’s not careful.”
Garrett laughed and slapped the dust off his thigh, the motion garnering Cole’s attention. The heat of Cole’s gaze flushed him warm all over. He couldn’t help but engage in a little appreciation of his own. His tongue wetted his lips as he took in the round curve of Cole’s ass, his narrow hips, up his wide, work-chiseled chest, and finally his face. The man’s gaze blazed hotter as Garrett brushed his hand closer to his groin. “That’d be a waste if you ask me.”
Cole swallowed and snapped his attention back up, his eyes shining. “Yes, it would be. A real shame.”

Eva Bio:
Eva Lefoy writes and reads all kinds of romance, and is a certified Trekkie. She’s also terribly addicted to chocolate, tea, and hiking. One of these days, she’ll figure out the meaning of life, quit her job, and go travel the galaxy. Until then, she’s writing down all her dirty thoughts for the sake of future explorers.
Shiloh Bio:
Shiloh Saddler likes to do research for her steamy romances first hand. She has invented a time machine and travels back to the 19th century on a regular basis. There are experimental settings on her time machine which could propel her into the future and even other worlds. She believes love and a good book makes anything possible.