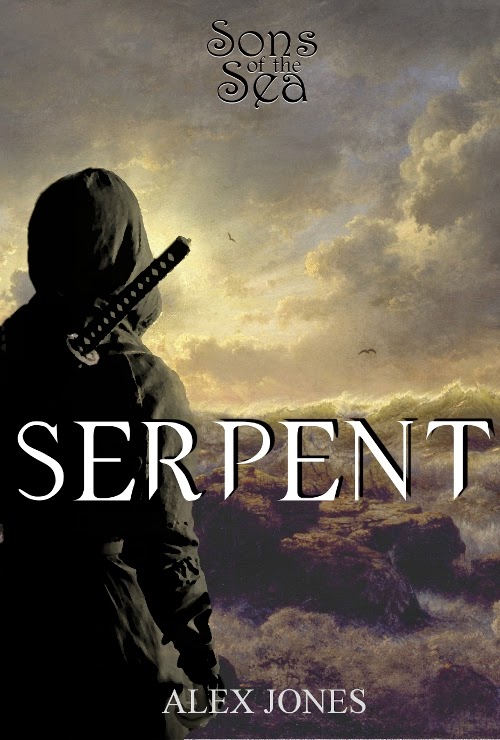 Sons of the Sea is an m/m fantasy collection centered around one thing: sea fey. Shifters, mermen, demigods.. You name it! I had a ton of fun doing research for the stories (cryptozoology can now be added to my list of random knowledge) and figuring out how the stories all intertwine. Each of the novellas is a standalone, but they're all pieces of a bigger picture that I hope by the end is a haunting and evocative tale.
Serpent is the second novella in the collection. The story centers on Bastian, a young man living alone in a cottage by the sea. It's been three years since his mother died, but he continues on in isolation until a strange visitor brings laughter, magic and love into his life.
I hope you enjoy the excerpt, and be sure to enter the giveaway below for a chance to win a free ecopy of Serpent!

Excerpt:
The cottage on the hill had stood as long as Bastian could remember, and longer still than his mother had known, who was a child when the great storm destroyed the harbor in the south two score years ago. Its faded yellow stone and thatch roof were a mix of odd repairs by varied hands. Vines crawled the outer faces, and a small window overlook the drop of cliffs at its back. The wooden door had worn with many summers of storm and wind—yet still it stood, a refuge in the wilderness spreading about it.

As they journeyed closer, relief swept into Bastian’s chest—the sight of home lifted a shadow that had hung over him, since the storm. He gained strength through determination, which brought a chuckle from the man at his side.

“Slow down, boy. We’ll make it there soon enough.”

He did not heed the admonition. He crossed the little yard with sure footsteps, and reached the door. Rain had soaked the wood through, but with a final creak it gave. The man assisted him into the shadows beyond.

A warm scene met him—the table covered with baubles and driftwood, the cooking drum sitting where he had left it before the hearth, the small stack of wood in the corner beside a handful of potatoes for peeling. His thatched pallet on the floor by the hearth, at the foot of a rocking chair so worn with years it was a wonder it stood at all. The cottage had weathered the worst of the storm, and only a few damp patches could be seen on the earthen floor where the deluge had beat through the roof overhead.

Bastian smiled, and made for the chair of his own accord. The man’s arm released him as he hobbled in a pained step-hop to the seat, and sank into it with a wince. He blew a slow exhale of air.

It was then he realized a stranger had entered his home.

The man stood by the table, watching him with keen, appraising eyes. That gaze still sent shivers down Bastian’s spine, though he could not have said why. He sighed, looking the stranger over with new eyes, now safe in the harbor of his home. He stood nearly a head taller than Bastian himself, a giant beside the low-set table he now rested his hands over. Those hands were as large as the man himself, but did not have the look of a fisherman’s, calloused and worn. They were lithe and clean, and his fingernails had been polished recently. Under closer scrutiny, the man’s tunic and leggings were well-made, masked by the plainness of them. And despite his age—a good ten years or more past Bastian—he did not have any hint of a shadow about his jaw that would say the man shaved. And the ink-jet hair that set close to his temples was clean and groomed. He had all the markings of a noble; but Bastian had never seen a noble with that peculiar edge of a smile, or laughter in their eyes.

It made little difference. Taking in another pained breath, he spoke. “Thank you, sir… I can manage now.”

Instead of return the formality and leave, as Bastian expected, the man cast his gaze around the cottage. “…Are you alone here?”

The question was earnest, and curiosity laced its tone. But Bastian did not want to betray more than he already had to a stranger. “…I will manage.”

A twinkle came to the man’s eye, and he took up one of the shells resting on the table—a large orange conch. It had been a discovery of his last year, and it was so beautiful, he had not the heart to sell it. Not unless need overruled fancy.

“…You did not answer my question,” the man smiled, turning the piece over in his hands. “Do you have a family? Neighbors?”

Blurb:
Bastian spent many years on the shore of the sea, salvaging trinkets and watching for storms. He learned long ago to hide from the thunder, the lightning and merciless rain. But on that evening when the storm came rolling in, something kept his feet from running. Battered by the current, he is thrown into the sea only to be rescued by an unlikely savior—a serpent who becomes a man.

Mareas, he is called: son of the sea itself, and patron of lucky fortune. Mareas brings magic into his life, waking powers Bastian never knew he possessed. Under the guidance of Mareas, the young sea mage begins learning the truth of what he is capable, while yearning for more than friendship from his mysterious fey visitor.

But Mareas guards a dangerous secret. When the truth of his tragic past descends, it is he who must rely on Bastian’s magic to save them from the storm.

a Rafflecopter giveaway
Posted by Unknown at 6:20 AM