The Foreman By J.T. Hall 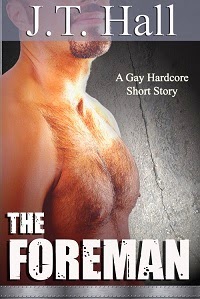 So excited to have a writer friend of mine, J.T. Hall, on the blog today, talking about her latest release, "The Foreman."

Where are the bears?

As I’ve mentioned once or twice on my blog, I’m a proud member of the Grand Canyon Sisters of Perpetual Indulgence, a volunteer ministry that serves the LGBT community. The majority of the Sisters are gay men, which isn’t surprising given that the original Sisters were a bunch of theatrical gay men in San Francisco in 1979 who just decided for the hell of it to wear nun outfits and take to the streets in the name of gay rights.
I mention this because of the thirty or so members of our local house, there are quite a few “bears”—bearded men who tend to be a bit rounder and hairy, not the stereotypical young twink or shaved and toned bodybuilder. And when we head out to the bars to distribute condoms or teach about safe sex and raise money for AIDS research, my fellow “Sisters” like to point out to me choice specimens of their type—other bears. It’s amusing to me because in my glittery Sister makeup and glamorous outfits, people have a hard time determining if I’m male or female. Not so the bears with their beards.
That brings me to gay fiction, particularly gay erotica. Try searching for “gay bear erotica” on Amazon. I got 215 results. Well that’s not too bad, right? Only among those 215, you find about half of them are actually wolf and/or bear shifter m/m romance. Not really the same thing. (Also a Panda bear shifter story, but I won’t go into that). So in comparison to other gay erotic themes and especially mmromance, there aren’t really a lot of bear stories. Even more interesting, I noticed that a lot of the offerings only came out this year.
Why the lack of love? Are we just too fixated on the men who look like models? Is the market just too small for this sub-genre?
Dreamspinner decided to do a bear gay romance anthology this year, their first, I believe. I peeked in on their Goodreads chat and found people seemed to be really excited about the upcoming release, citing how hard it is to find good bear stories. So the demand seems to be there.
I think this is a case of something readers have known about for some time, and only now the writers are getting on board to deliver the product. I know that I only wrote my first bear story (The Foreman, out now on Amazon and other vendors) this year as well. So I’m not sure if this is just another step forward in gay erotica and fiction, that we feel comfortable enough to loosen the belt and let the gut hang out, or what. It could just be a fad. But I don’t think so.
The more accepted that same-sex partnerships and LGBT fiction becomes, I think the more the sub-genres will get some attention and love. That means just as heterosexual erotica started embracing the bigger dress sizes, gay fiction is also embracing more of the meaty offerings, more “real” body types.
If you love bears, 2014 is turning out to be a great year.
Let’s  hope it continues.

Now out: “The Foreman,” available at Amazon, Barnes and Noble, and other vendors.
Amazon: http://www.amazon.com/Foreman-Hardcore-Gay-Short-Story-ebook/dp/B00MQDHMVY/
Barnes and Noble: http://www.barnesandnoble.com/w/the-foreman-jt-hall/1120171704
Posted by Unknown at 5:00 AM

Email ThisBlogThis!Share to TwitterShare to FacebookShare to Pinterest
Labels: J.T. Hall, The Foreman