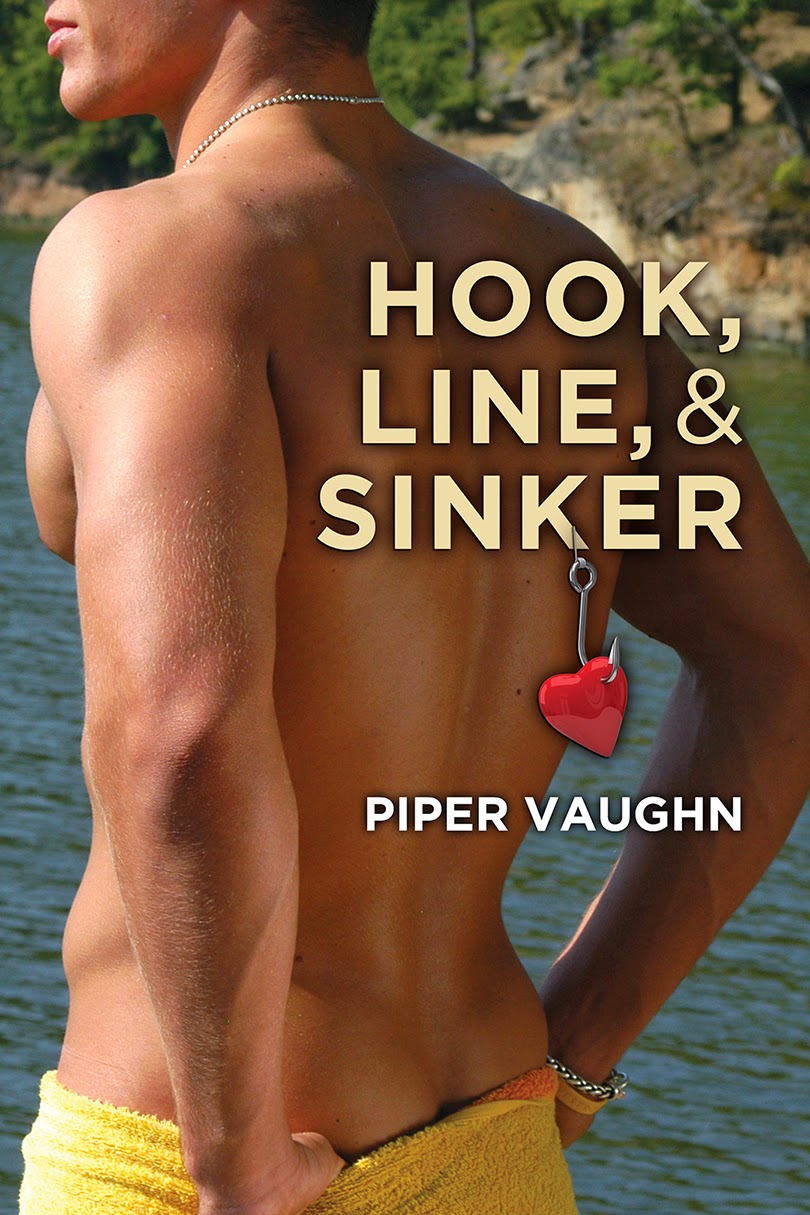 Goodreads Link: https://www.goodreads.com/book/show/23250029-hook-line-sinker
Author Name: Piper Vaughn
Author Bio:
Piper Vaughn wrote her first love story at eleven and never looked back. Since then, she’s known that writing in some form was exactly what she wanted to do. A reader at the core, Piper loves nothing more than getting lost in a great book—fantasy, young adult, romance, she loves them all (and has a two thousand book library to prove it!). She grew up in Chicago, in an ethnically diverse neighborhood, and loves to put faces and characters of every ethnicity in her stories, so her fictional worlds are as colorful as the real one. Above all, she believes that everyone needs a little true love in their life…even if it’s only in a book.

Author Contact:
https://www.facebook.com/pipervaughn
https://www.facebook.com/pipervaughnauthor
https://twitter.com/pipervaughn
http://www.pinterest.com/pipervaughn7/
http://pipervaughn.tumblr.com/
Publisher: Dreamspinner Press
Cover Artist: Paul Richmond
Blurb:
When they were teens, Castor McCormick was the bane of Blake Kowalski’s existence. Their mutual animosity led to summers filled with rivalry. Now, nearly two decades later, Cas is moving back into the neighborhood to live in his grandmother’s old house. Blake tells himself he isn’t interested in seeing how snarky little Cas grew up, but when his mother dupes him into visiting his former nemesis, he finds out “pretty” can evolve into “sexy as hell” on the right man.

Cas didn’t think he wanted to see Blake again. No one has ever pushed his buttons like the arrogant boy he remembers from their youth. Turns out, the adult version of Blake still gets him hot under the collar—and everywhere else. With Blake on leave from work to nurse an injured leg and Cas taking time to move and unpack, they form a tentative friendship that turns into a sexual affair neither man can deny. But when Cas’s job sends him out of state to deal with a difficult client, their new relationship will be tested, and if they fail, Blake’s broken leg might not be the only thing to end up scarred.

Excerpt:
Blake's mother didn’t live on a busy street, but being summer, the kids were out in full force. The occasional shout or burst of laughter broke the monotonous silence. And then there were the comings and goings of a certain new neighbor whom Blake had absolutely no interest in watching, even if he found his gaze frequently straying in that direction. He’d caught glimpses of the moving truck over the weekend, along with a dark blue Prius, which made him snort. No doubt the driver of a hybrid would hate his gas-guzzling Ford F-150. For some reason, it seemed fitting. He could picture the old Cas growing up into the tree-hugging, granola type.
Idly, he let himself wonder what the adult Cas might be like. When they’d first met as teenagers, the kid had reminded Blake of a scrappy little Irish chimney sweep, minus the accent. The pale skin, the freckles, that mop of messy dark hair. Put him in a newsboy cap and some wool trousers, and he could’ve been an extra in Oliver Twist. Blake had constantly ragged on him about it too. That is, until the following year, when postpuberty Cas showed up. Gone was the scrawny, gangly limbed half-pint from the previous summer. In his place stood a boy with the lithe, wiry body of a distance runner and a face like something out of a goddamn Botticelli painting. Only his smartass mouth had stopped Blake from falling to his knees in worship—though it certainly hadn’t prevented a wet dream or three.
Blake couldn’t lie. His mother’s mentions of Castor had made him curious despite himself. But he didn’t intend on giving in to her badgering about going over there. What the hell would he even say? Welcome to the neighborhood? Here’s a fruit basket. Let’s be friends? He could only imagine Cas slamming the door in his face in response. Blake chuckled and shook his head. Not going to happen. Not in a million years. No matter how much his mother pestered him.

Rafflecopter Prize: E-copy of Hook, Line, and Sinker upon release and a $10 gift card to Amazon or ARe (winner’s choice)
Sales Links: http://www.dreamspinnerpress.com/store/product_info.php?products_id=5627