Reining Him In By Jena Wade

I was on an airplane heading for RainbowCon in April reading the last chapters of this story for my Crit Group...I had to read it through tears it was so good! I am sure you will enjoy! 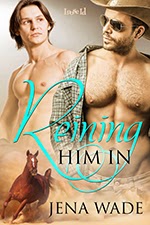 http://www.loose-id.com/reining-him-in.html
www.jenawade.com
Blurb:
Perry Jameson begins his new job as a ranch manager at the Wright Stables with the goal of returning the place to its original glory. He throws all of his effort into building a home and establishing a career. Being seduced by the ranch owner's grandson could throw a serious wrench in the works.

Cory Matthews is a world champion in horse reining. Well known for his arrogance and talent, he can train any horse to win, and he knows he's turned the sexy older hunk's head, but he can't seem to get Perry come around.

The two men butt heads on more than one occasion, the way two stubborn, proud studs will do. Maybe looking past their differences to work together will give them a new perspective on each other. Maybe, just maybe, it'll help Cory rein Perry in.
Excerpt:
Perry was bone tired. With each step his muscles ached and a headache throbbed behind his eyes. Since starting at the ranch he’d worked nonstop, anxious to get the place shipshape as soon as possible. Already some of the boarders had commented on the improvements. Despite the fact that they were at full capacity, they’d had a few calls about people interested in boarding there. He’d even lined up a few new clients to bring their horses for training at the end of the summer.

He’d repainted the old sign by the road, reshingled half of the barn roof, and fixed a handful of other odds and ends that needed repair. He’d worked harder this week than he had in a long while, barely making it to bed each night for more than a few hours before he was up and at it again the next day. But it would all be worth it once the place was running smoothly again.

Perry took the tractor and hay rake into the barn, ready to take a quick break for dinner before doing the evening chores, when a pickup truck and trailer drove into the driveway. The cherry-red paint on the truck, combined with the chrome rims, nearly blinded him as it pulled to a stop in the middle of the drive, blocking the way for anyone who might need to get in or out.

The impressive rig had the ranch’s logo stuck to the side. Over half of the trailer accounted for the living quarters alone, with more square footage than the cabin Perry was staying in.

Perry shook his head. Hopefully the visitor didn’t plan on staying there long.

He parked the tractor and hopped down, hearing his back pop and crack as he hit the ground. He sure felt every bit of his twenty-eight years. And then some. Just another reminder that he’d spent too many hours working today without a break. Did he eat any lunch? He couldn’t remember.

Tonight would be a good night to sit in his recliner and lose himself in one of his Louis L’Amour books. It’d been too long since he’d sat down and read. And later, after he’d checked the horses for the night, he might actually be able to get more than a few hours of sleep.

Before he could even start walking in the direction of his house, the horses inside the trailer began kicking and neighing, not wasting any time expressing their impatience. The driver stepped out of the truck, and Perry had to stop in his tracks.

The man was tall and lean. He wore a plaid button-down Western shirt tucked into a pair of snug jeans that hugged every curve of his muscular thighs. A silver belt buckle glinted in the late-afternoon sun, drawing Perry’s eyes straight to the man’s groin. The man ran his hand through his hair and stuck a black cowboy hat firmly on his head.

He was exactly what Perry’s dreams were made of.

Feeling his cheeks heat, Perry headed in the opposite direction. This had to be the grandson he’d heard so much about. He would have to meet him sometime, but right now, when he was fighting a hard-on, was not the time.

Tre had neglected to mention that the grandson was so damn attractive. Though he looked a little young for Perry.

Of all the fucking men to attract his attention, it had to be his boss’s grandson? This couldn’t end well.

Ten minutes later, Perry stood inside his cabin, washing his hands at the kitchen sink, when a loud pounding like hooves on metal caught his attention. From the window he could see the trailer in the driveway rocking as the horses inside made sure everyone knew their discomfort. Everyone except the person who should be taking care of them.

“God damn it.” The grandson—what was his name? Cory? —he may be hot but he apparently didn’t know jack shit about taking care of his animals. Or he was too much of a dick to care. Either way, Perry didn’t have time to contemplate why the horses were still locked in the hot trailer after a long road trip.

Perry grabbed his hat and pulled on his boots, then stomped out the door and to the trailer, cursing Cory with every step.
Posted by Unknown at 8:49 AM

Email ThisBlogThis!Share to TwitterShare to FacebookShare to Pinterest
Labels: Jena Wade, Loose Id, Reining Him In