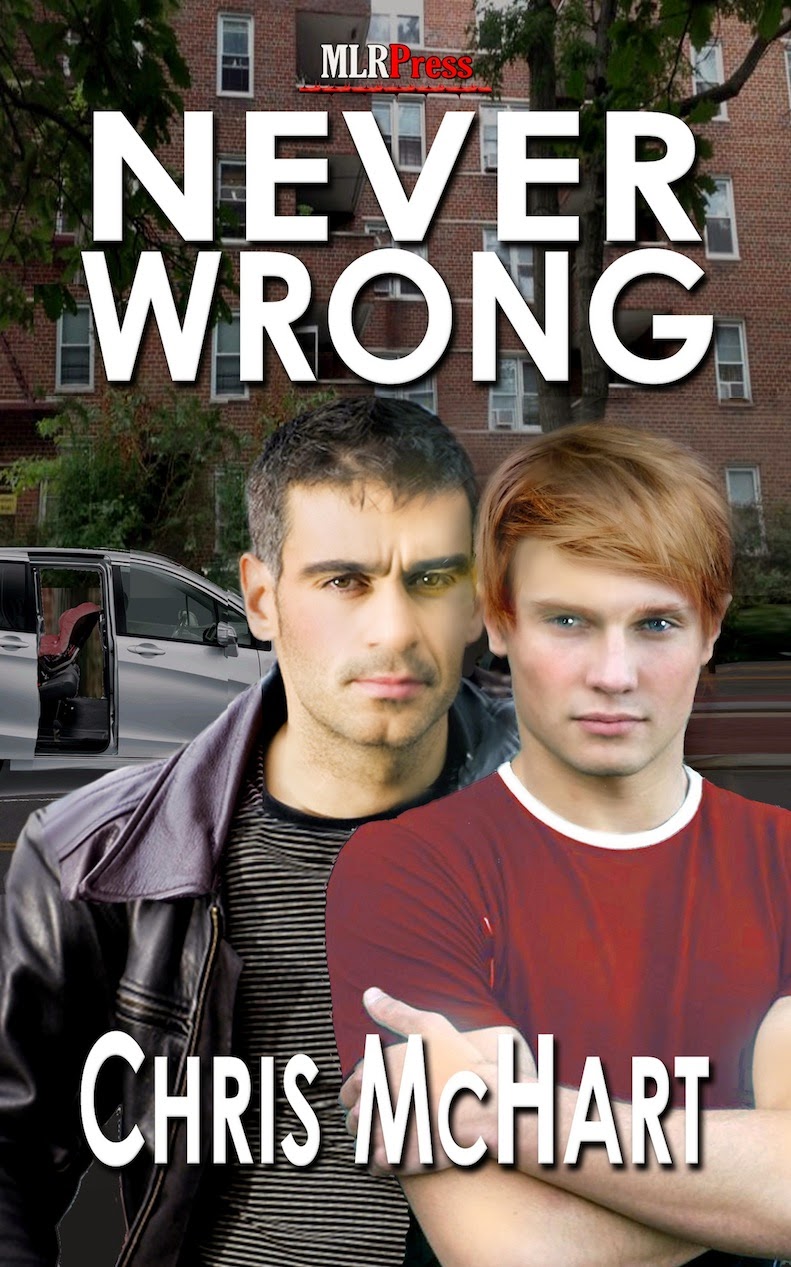 I am excited to have my critique group partner, Chris McHart, and her new release from MLR Press, on the blog today!

Jeff was raised to believe love between two men is wrong. Or is it? Can love ever be wrong?
When Jeff meets the much younger Dean, he only knows he wants him, consequences be damned. But things are not as easy, especially after Jeff's ex calls and announces big news.
And Dean? He thinks the new neighbor is hot, but he's not interested in something more than a rebound fuck. That's what he tells himself, at least.
But lust isn't a good basis for a relationship, more so since Jeff isn't sure whether he can deal with being gay.
Love is never wrong, but can Jeff accept that?

What the hell possessed me to buy so much shit?
I stood in front of my car’s open trunk, and tried to work out how the hell to get all this stuff up to my fifth floor apartment. Without an elevator, of course. The nice guy at the store had packed most of it in bags, but there were about eight of them. Along with a few items that were too big to fit into bags. I was going to have to make a lot of trips up and down the stairs. Damn.
I should have bought a few things at a time, not everything the first day. It figured I’d go overboard, trying to make my new apartment as comfortable as possible. Understandable though, since this was the first time I was totally, completely on my own, but I might’ve gotten a bit too much.
“You’re my new neighbor, aren’t you?”
The deep voice, coming from behind me, shot shivers down my spine. I turned. My gaze traveled up and down the man standing in front of me, and holy shit. Short, dark brown hair with grey at the temples highlighted the sharp features of his good-looking, angular face. And he had a body that made me want to beg. I didn’t know what to beg for, just that I wanted to. Damn. Muscles defined his arms, not too obvious, but clearly there. Along with the slight padding on his hips, his appearance gave me the impression that he might work out, but was definitely not obsessed with it. He was somewhere around the age of forty, forty-five, if I guessed right. A man of my tastes.
What I wouldn’t give to be allowed to run my fingers over his stomach, trace the hairs that grew there, up to his chest, where the dark curls peeked out from under his shirt. And then down to his cock, likely nestled in the same coarse hair, standing ready for me. His matted torso would contrast so nicely with my sparsely haired chest. The hairs would tickle my nipples and my stomach, right down to where I wanted to feel his touch most.

Chris McHart is from Germany and while an accountant, writing is Chris’s real passion. Chris likes to spend time with family and has way too many animals that demand constant attention. Chris also enjoys landscaping and cooking.
Whenever Chris has a free minute, it’s spent writing ona laptop, a cup of coffee in hand, deeply lost in the world Chris’s muses have created.
When coming up for some air, you’ll find Chris on a lot of social networks. Check out Chris’s website to see where you can find out more. Chris looks forward to hearing from you!
Web: www.chrismchart.com
facebook: https://www.facebook.com/profile.php?id=100008256641886
twitter: https://twitter.com/chris_mchart
google+: https://plus.google.com/u/0/107541761558868120374/