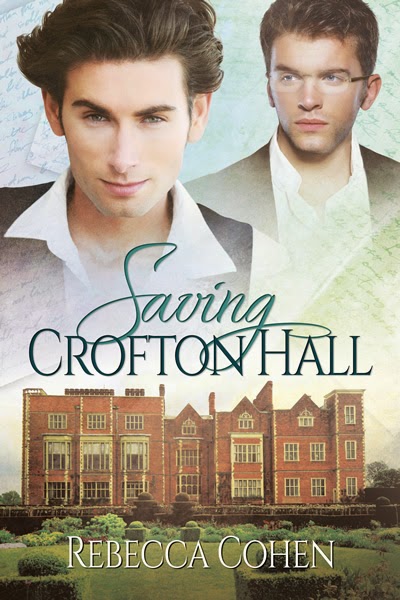 I am excited to have Rebecca Cohen on the blog today!

Saving Crofton Hall is my first contemporary novel, but its inspiration springs from my historical romance series, The Crofton Chronicles, which are set in Elizabethan England. I love old British stately homes, and I decided to set a story in one and used the current Earl of Crofton (the 16th), which brings the Redbourn family bang up to date. And I had really great fun returning to play with this interesting family. The older the family, the more secrets they have, and I decided to play on that idea. However, in Saving Crofton Hall, Benjamin Redbourn’s main problem isn’t a secret hidden for centuries but what his mum’s been hiding from him in the present day. Many of Britain’s stately homes are now open to the public, they are simply too expensive to run, so even a wealthy family would have trouble. Add on Lady Crofton’s gambling debts and the Redbourns need to find a way to make enough money to keep Crofton Hall as their home. And having been to a friend’s wedding at one such property I thought it would great fun to open up the Redbourn family home and seen how they coped.
Crofton Hall is inspired by three lovely houses: Harvington Hall, Sudbury Hall and Hatfield House. Of the three only Harvington Hall was standing when the original Crofton Hall was built (1560s) but Hatfield House (built 1611) is more like how Crofton Hall is today, being in the same geographical area and having the same sort of architectural changes that were incorporated over the years. Most manor houses were adapted to meet the needs of the family at the time and the Redbourns certainly change their home over the centuries, with the extended Victorian kitchens, the Georgian banqueting hall and twentieth century plumbing.
As for the current earl, I want him to be a good guy. I love Bertie Wooster from the P.G. Wodehouse Jeeves novels, and Ben is lovely like Bertie but not so dim or unable to cope at life. While Ben doesn’t need a Jeeves to be his valet he does need someone to help save Crofton Hall from the bank, and his saviour arrives in the shape of Ashley Niven, a friend of Ben’s little sister Catlin and a man very passionate about history and old houses, and also, as it turns out, earls.

Goodreads Link: https://www.goodreads.com/book/show/23286754-saving-crofton-hall
Author Name: Rebecca Cohen
Author Bio:
Rebecca Cohen is a Brit abroad. Having swapped the Thames for the Rhine, she has left London behind and now lives with her husband and baby son in Basel, Switzerland. She can often be found with a pen in one hand and a cup of Darjeeling in the other.
Author Contact: https://www.facebook.com/rebecca.cohen.710, http://twitter.com/R_Cohen_writes
Publisher: Dreamspinner Press
Cover Artist: Reese Dante
Blurb(s):
Benjamin Redbourn, Earl of Crofton, has no intention of giving up his beloved ancestral home without a fight. Faced with his mother’s gambling debts, forgery, and the possibility of foreclosure by the bank, Ben vows to make Crofton Hall pay for herself. But opening an Elizabethan manor house  to the public isn’t a one man job. With time running out, Ben needs help—and fast.
Ashley Niven has experience managing events, and he also loves history. Being in charge of opening Crofton Hall is a dream come true. As he works with Ben to prepare the house as a venue for lavish weddings and receptions, Ashley finds himself drawn not just to the charm of the house but to the dashing Earl of Crofton.  Even if Ashley can look past Ben’s playboy reputation, he fears an affair could prove too much of a distraction.
But Crofton Hall has many secrets, and something hidden for over four hundred years is about to change all their lives.
Categories: Contemporary, Fiction, M/M Romance, Romance

Excerpt:
“How much?”
She wouldn’t meet his eye.
“Mum!”
“Just short of five million to the bank.”
Ben lost his balance and landed heavily on his arse in a nearby chair.
“How the hell did you manage that? I only agreed to borrow five hundred
thousand, and that was for essential repairs, and the estate could easily
repay the loan in ten years.”
“I approached the bank with a business case for a visitor attraction.
They were very enthusiastic.”
“What gave you the right?”
“Your father left us both in charge of Crofton Hall, Benjamin,” she
said sharply.
He glowered at her and she deflated.
“I needed the money, and the only way I could get it was to tell the
bank I wanted to open Crofton Hall to the public.”
“And they agreed to lend the money without my permission?” he
asked carefully, hardly believing his mother’s audacity, but getting the
feeling he knew what she was going to say next.
“They might have been under the impression that you’d agreed to it,
and I was acting on both our behalves.”
“Really. And how would they have thought that?”
“Your signature isn’t exactly hard to copy.”
Ben covered his face with his hands, understanding what his mother
had done.
“I know I shouldn’t have, not without your permission, but I was
desperate. And the bank thought our business plan was excellent.”
He looked up at her. Elena’s eyes were red from crying, but there
was still an edge of defiance in her face. “How much is left?”
She shrugged. “A few thousand, maybe.”
“And you used Crofton Hall as security?”
“Yes.”
The anger flashed through him, burning through his usual amicable
nature. “How could you have been so stupid? Were you even thinking past
your own selfishness?”
Elena cowered in her seat.
“You’ve ruined us, destroyed this family!”
“I didn’t mean—”
Ben didn’t want to hear her feeble excuses. “Oh, that’s all right, then.
We’ll tell the bank, you didn’t mean it, and they’ll forget all about it.”
Ben reined in his anger. Taking deep, slow breaths, he clenched and
unclenched his fists as he regained his calm. He watched Catlin pace up
and down. Harry stood slumped against the fireplace, shell-shocked. Now
was not the time to panic. He needed to know exactly how much trouble
they were in and deal with it. “Get me the paperwork.”
Without argument, Elena jumped to her feet and scurried over to the
writing bureau in the corner. From the folds of frills and ruffles of her
blouse, she fished out a key on a chain and unlocked the bureau. She drew
out a sheaf of paper. “It’s all here.”
“Right, let’s hope my economics degree wasn’t for nothing.” Ben
snatched the papers. “I suggest you all keep your distance until I’ve
finished reading.”
He sank into a chair by the unlit fireplace, blocking out the angry
thoughts as he scanned sheet after sheet. The figures danced before his
eyes, and he saw the terms and conditions his mother had agreed to. The
interest, compound interest, and payback terms were listed and
categorized in black and white with no way of denying the facts. They
were in deep shit, the bank would be at the door within weeks, and Ben
seethed internally at his mother’s gall.
The effort she’d put into defrauding the bank was amazing, the
business case had been full of fine details and promised an excellent
return, but little help would that do them now.
Unless….
Ben stared around the sitting room; generations of Redbourns had sat
in here. Men who’d fought at Blenheim, Waterloo, and El Alamein —they
would never have given in and surrendered Crofton Hall in the face of
adversity. And it wasn’t about to happen while Ben was Earl of Crofton
either. As much as he wanted to rail against it, their only hope was to
convince the bank they were following through with the idea of opening
the house to the public.
“We can probably sell the London apartment. That’ll raise around
two million. Our trust funds are protected, so we can’t release the equity
from those. If we’ve any hope of holding on to her, Crofton Hall is going
have to earn her keep.”