Blood and Rain by Shira Anthony 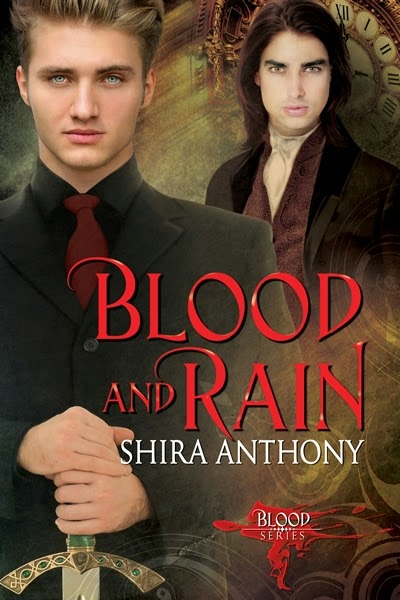 Thank you, Dean, for hosting the Blood and Rain Blog Tour! I’m so excited about the release of the first book in my Blood Serieshttp://www.dreamspinnerpress.com/store/index.php?cPath=1303. Blood and Rain is the first in a series of three books. The second book, Blood and Ghosts, is on the way and set for publication in spring of 2015 and is currently in edits. Look for the last book, Blood and Eternity, in late 2015 or early 2016.
I’ve always loved fantasy and supernatural stories, and I grew up reading Anne Rice’s Vampire Chronicles series. I loved the interplay between blood and sexuality, and I loved the concept of immortality. Anne Rice’s vampires were flawed souls who often struggled to retain their humanity in spite of their changed bodies. And while I can’t say I was a fan of Twilight, I’ve continued to enjoy vampire stories such as the Sookie Stackhouse/Southern Vampire Mysteries and their television counterpart, True Blood.
Those readers who know my books know that I love character driven stories. Even when I’m writing my mermen shifters, I like to put characterization above all else. And let’s face it, vampires help shine a light on the human condition. Whether they’re confident that they are truly above humanity, or whether they struggle to maintain their humanity when they need human blood to survive, it makes for some great tension in a story.
The vampires in the Blood Series fall into two categories: those vampires who were born as vampires, and those vampires who were created from humans by vampires. The first category, “ancient” vampires, are vampire royalty. They also feel themselves responsible for weaker, younger vampires. And that’s the setup for the political tension in the world of vampires.
The story revolves around the tensions between vampires and vampire hunters, humans with unusual abilities who were once part of the vampire race. The Council of Hunters enforces a treaty between hunters and vampires, and sends its hunters to execute vampires who harm humans. But some of the vampire hunters don’t approve of a system in which vampires have a say in the hunters’ world, and they plot to overthrow the hunters who wish to continuing working with vampires.
Enter Adrien Gilbert, the youngest son of an old clan of hunters. Adrien saw his mother murdered by a vampire, and he believes a vampire has murdered his brother. When the Council sends him to track down and execute his brother’s murderer, Adrien enlists the help of ancient vampire Nicolas Lambert. The last thing Adrien, who hates vampires, expects is to fall in love with the gentle Nicolas.
The Blood Series is one story told over three books and has three MM relationships at its heart, with the main focus on Nicolas and Adrien. The first installment sets up the tension between the different hunter factions, and sees naïve Adrien grow and learn about hunters and vampires. Adrien’s world completely changes as a result of his involvement with Nicolas, and by the end of the first book, Adrien’s a very different person than he was.
I hope you enjoy the Blood Series! I’ll leave you all with an excerpt and a giveaway contest. You have until New Year’s at midnight to enter to win a stunning handmade unisex hunter pendant by artist Martin Brodour and a Dreamspinner Press gift certificate. The link to enter is below. Happy reading! -Shira

Author Bio:
Shira Anthony was a professional opera singer in her last incarnation, performing roles in such operas as Tosca, Pagliacci, and La Traviata, among others. She’s given up TV for evenings spent with her laptop, and she never goes anywhere without a pile of unread M/M romance on her Kindle.

Shira is married with two children and two insane dogs, and when she’s not writing, she is usually in a courtroom trying to make the world safer for children. When she’s not working, she can be found aboard a 35’ catamaran at the Carolina coast with her favorite sexy captain at the wheel.

Adrien Gilbert has spent several lifetimes searching for the love he lost. Born in the 1800s into a clan of fabled vampire hunters, Adrien once wanted nothing more than to tend his family’s vineyard in southern France or read a good book. But Adrien’s peaceful existence ends abruptly when his older brother, François, is murdered. Bound by his hunter’s oath, Adrien sets out on a path that will forever change his life when he agrees to execute his brother’s killer, the vampire Charles Duvalier.

After months chasing the elusive Charles, Adrien reluctantly makes a bargain with Nicolas Lambert, an ancient vampire. Adrien will escort Nicolas to Paris for his marriage to a rival clanswoman, and Nicolas will help Adrien find Charles. Nicolas’s quiet strength and gentle heart soon convince Adrien that Nicolas is nothing like the vampires he has sworn to destroy. As the wedding date draws nearer, a force intent on destroying the fragile peace between the vampire clans threatens to tear apart both the vampire realm and the world of the hunters. To secure both past and future for those he loves, Adrien must find a way to stop the looming war between hunters and vampires. But first he’ll have to let Nicolas go.

Excerpt:
Adrien licked the skin of Cole’s neck, feeling the blood pulse there, hearing it call to him. Cole tilted his head in anticipation, opening himself to Adrien.
Adrien buried his teeth in Cole’s skin. Blood flooded his mouth and danced on his tongue, sweet and salty. Too long. His body was far more vampire-like in its craving for blood than when he’d first been given the gift of an ancient vampire’s soul. He wondered if it was the same for other immortals.
Adrien tried to ignore the images that flashed through his mind—the sound of silvery laughter, a mother’s loving caress. Cole’s memories. Adrien despised this forced intimacy, but he’d come to see it as the price of blood. Something to be tolerated.
It hadn’t always been that way. When he’d shared Nicolas’s blood, Adrien had experienced great joy. He’d seen himself through Nicolas’s eyes and felt the depth of Nicolas’s love. Each drop of that precious liquid had opened new doors. Each taste offered insight into Nicolas’s heart and soul. A beloved memory. A mystery—the mystery of Nicolas—unfolding with every swallow.
Adrien drank his fill, then claimed Cole’s mouth. This kind of contact he could stomach. He didn’t need sex to survive, but he enjoyed the release. Cole unbuttoned Adrien’s black silk shirt and his cock swelled against Adrien’s thigh. Adrien moaned as Cole skated his fingertips over his chest.
“I have never known a hunter to crave blood,” Cole whispered in his ear. “I thought only we experienced the bloodlust.”
“You were wrong,” Adrien said as he pulled Cole’s shirt over his head and mouthed a pretty pink nipple. Sex was always better after he fed, and Adrien’s cock was already hard at the thought of fucking such a lovely ass. He drew Cole’s body against his, walked backward into the living room, and pulled Cole with him onto the rug. Soon they were naked and he was no longer a hunter or an immortal, he was simply a man, seeking release, seeking pleasure.

For at least an hour after, Adrien lay on the floor and allowed the night air to caress his bare skin. He closed his eyes and dozed.
“Adrien.”
The voice awakened him. Nicolas’s voice again. Why sleep if it only served to reawaken the pain he sought to suppress?
He stood and pulled on his jeans. He walked onto the balcony in his bare feet, then climbed to the roof of the penthouse.
Pathetic.

Having reached the edge, he spread his arms. He leaned forward and fell unimpeded, riding the wind like a sigh. The glass of the building sailed by him, the breeze buffeting his face. He hit the water and sank into the cold blackness. He wished he could die.


a Rafflecopter giveaway
Posted by Unknown at 7:00 AM