Claimed by Love by Skye Jones 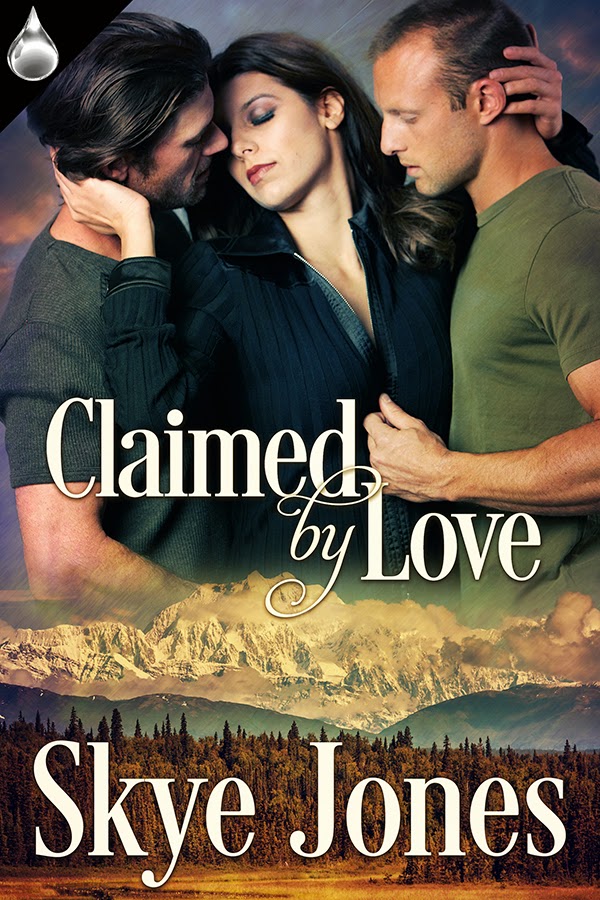 Blurb: Kayley Edwards has spent the last four years closing herself off after a vicious attack by her lover left her scarred and terrified. After fleeing her native Alaska, she ran the length of the country and began a new life in Miami far from her family and friends.

When her cousin and his friends decide to vacation nearby, he invites her to join them, saying he has important news. Determined not to let fear rule her life, Kayley agrees to meet with them, only to have her world turned upside down. His friends include the two gorgeous men who’ve haunted her dreams for months, kindling her desire, and challenging her to take a chance on love.

Pack alpha, Luke Johnson, has sensed Kayley in his visions for years. He and his mate, Sean Wallace, know she is meant to be theirs. But how will she react when she finds out the world they inhabit is one she never dreamed existed? As passions collide, Sean finds himself acting as a bridge between his strong willed alpha and a skittish Kayley. But can they break through Kayley’s defenses and convince her to join their family?

Just as it seems the three may have a future together, a ghost from Sean’s past strikes at the heart of their happiness. They must fight for everything they hold dear to win their chance at love.

Excerpt:
Kayley turned around and stared out the window, watching an ocean liner pass by, stately and slow. She wondered how many people were on board and where they were headed. Its bright deck, festooned with trailing lights, stole through the dark night, warming the black depths.
Despite the rental’s location on the beach, a pool shimmered to one side, eerie green in the dark. The people within the room were superimposed over the dark skyline and twinkling lights beyond, and she found herself surreptitiously watching them interact.
Julie, Will, and Sean held a heated debate about the best tracking system to use, and Luke had joined Taylor in the kitchen, where they talked in a low murmur. She focused on the liner again before reflected movement behind her caught her attention once more.
Luke stalked over to Sean; there could be no other word to describe the way he moved across the floor. When he reached his quarry, he stood behind Sean and placed a large hand on each shoulder, then bent his head and dropped a gentle kiss into golden hair.
Still observing through the glass, she looked on as Sean tipped his head back and bared his throat for Luke to kiss. The gesture held a submissiveness that had her wondering about their relationship. Arousal flooded through her, tightening in her belly and pooling lower, its ferocity shocking her. Lips dry, she took a large drink of wine.
Across the room, Luke’s eyes snapped up, meeting hers in the glass, even as he continued to nibble at golden skin. Horrified she looked down, not wanting him to think of her as some cheap voyeur.