Scent of the Heart by Parker Williams 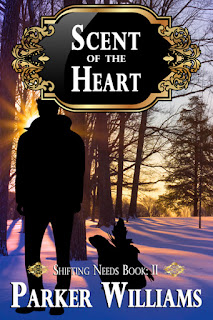 Casey Scott grew up being told he’d never amount to anything, and despite the unwavering
love and support from his best friend, Jake, the idea sticks in the back of Casey’s mind. When he
discovers he has a unique destiny in an enclave where shifters and humans live together, he
seizes the chance, wanting for once in his life to be someone special.

Tsvetok Yerokhin lost his parents to the evil ruler of the enclave when he was a boy. The
responsibilities of raising his two younger brothers nearly overwhelmed him and self-doubt
took over. When the new Alpha and his Protector arrive in time to save his life, Sev is grateful,
but he’s even more shocked when he scents his mate with them.

Casey isn’t prepared for the feelings that sweep over him when he meets Sev, but he refuses to
act on them because he’s straight. Still, there is something so alluring about Sev that Casey can’t
help being drawn to him.

As the two explore the edges of their new discovery, an evil returns, determined to control the
enclave or destroy it. The Alpha and Protector are powerless to stop it, but Casey holds the key
to victory. If he can discover what it is, he has a chance to save them all. To be the hero.

Unfortunately, the hero has to be willing to make the ultimate sacrifice, and for Casey that
means losing his heart.

Excerpt:
Casey had slept in the early evening, exhausted from his activities of the day. First the twins came, and their birth wasn’t easy. One of them, the boy, refused to come out. Normally shifter births were in and out in less than an hour. This one had kept him elbow deep for four. When the child was finally born, he had a full head of fluffy gray hair, indicative of his mother’s rabbit side. When they’d asked his advice on what to name their new son, Casey had said Thumper. His parents had fallen in love with the name, and Casey learned that people who had never seen a movie had no idea what humor was.
Then there was the incident with the stupid skunk in the forest. He hoped to hell Jake never found out, because after all the crap Casey had given him, he knew for a fact there would be hell to pay.
His intent had been to sleep a few hours, then try another dreamwalk. They always left him drained when he didn’t have a tether to this world. Casey shook his head. Six months ago he never would have talked about different worlds, men that could become animals, or ghosts outside of his weekly Dungeons and Dragons game. Now it seemed he was actually living a campaign. He was a shaman, a wizard of sorts. Jake was a paladin, righteous and good. Zak was…well, Zak probably would have been royalty. With his demeanor and attitude, he would have made a great king.
He’d been dozing fitfully; his dreams filled with visions of future events, where a fork in the road left him with too many decisions. One was life, the other was death, but both were fraught with peril. The knocking at his door had jolted him awake, and he was actually glad for it.
Sev looked absolutely miserable as he stood at the door. This would be only the second time the man had come to see Casey. Most everyone else in the enclave had stopped by, even for a friendly visit, numerous times. Yet Sev always hung back. This time, Casey needed to understand what was going on.
When they came in contact, skin on skin, Casey had no idea what happened. A surge ran up the length of his arm, seemingly connecting him to Sev. He could tell the man across from him needed his help. Sev was different from all the others in the enclave who’d come and talked to him in the last six months. He didn’t need advice; what he needed was someone to understand.
Sev sat at the table, looking for all the world as if he were lost. He sipped the calming tea that Casey had brewed, his eyes downcast as he told Casey his story—the death of his parents, the problems he now had with his brothers, and his uncertainty that he was doing the right thing. Never before had Casey wanted to pull someone into his arms and promise them that everything would be all right. He’d heard so many stories after Elizar’s defeat—beatings, rape, murder, and still he was able to maintain a detachment. Not with Sev.
“How can I help?”
Sev sighed. “I don’t know that you can. I just wanted to talk to someone.”
Casey could see the shine of tears when Sev finally lifted his head, and his chest tightened as he stood and wrapped his arms around the man. He didn’t have words, and he couldn’t think of any other way to comfort him. Not one of the salves, potions, ointments, teas, or other remedies on his shelves had the power to offer the healing that a hug brought.
“Thank you, my mate.”
The words were so soft Casey was certain he had misheard them.

Parker Williams believes that true love exists, but it always comes with a price. No happily ever after can ever be had without work, sweat, and tears that come with melding lives together.
Living in Milwaukee, Wisconsin, Parker held his job for nearly 28 years before he decided to retire and try new things. He enjoys his new life as a stay-at-home author and also working on Pride-Promotions, an LGBT author promotion service.


a Rafflecopter giveaway
Posted by Unknown at 8:18 PM