The New Hire by J.T. Hall 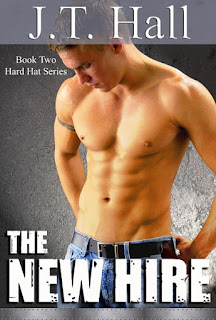 Gary’s got a problem with his new hire, Tim. He’s allowed the young, attractive guy to get under his skin, and now he finds that he wants more than just a casual fling. After an incredible night, all he can think of is having more of that innocent flesh, delving deeper into Tim’s submissive tendencies. But first they have to make it through the work day. A construction site is no place for a gay love affair.
Love hasn’t been kind to Gary, who prides himself on being a gruff bear, always in charge, always on his own. As he starts to train young Tim as his sub, however, Gary must decide whether to keep it just sex, or actually allow himself to feel something more.
Excerpt:
Gary attempted to sound casual. So not him. “So how was your day, Tim?” He pulled at Tim’s hair again, sharp little tugs, just to test the man.
Tim seemed to have some trouble speaking. “It was…interesting, Sir. I…” He blushed; Gary felt the heat against his jeans. “With the plug in, I kept imagining it was your cock.”
Man, it was nice having a boy. Gary chuckled, rubbing the outline of his cock through his jeans, then brushing against Tim’s cheek. “Did it hurt? I noticed you moving a little slower by the end of the day.” Gary grinned at the thought of the plug stretching Tim.
Tim smiled as well, nodding. “It was awkward. But not exactly painful, no. I used all the lube.”
Gary raised an eyebrow. “Sounds like you enjoyed it.”
By now, Tim’s face was bright red. “I kind of did, Sir. It was like a love/hate thing.” He looked up, his brown eyes meeting Gary’s. “I think I liked most the fact that it meant you still wanted to do stuff to me. This morning I was afraid you thought last week was a mistake.” His voice broke a little. Gary felt a disturbing heaviness in his chest at the look of vulnerability on Tim’s face. Damn. The puppy dog expression again.
He wasn’t about to let his heartstrings mess with their fun now. Gary patted Tim’s cheek and took a step back. “Hell yes I’m interested. But you’ll have to be patient with my timeline.” He smirked. “Speaking of which…present yourself.” He crossed his arms, happy to take the role of big bad Dom again.
Tim looked at him in confusion. “Excuse me, Sir?”
He looked too adorable to reprimand—well for the moment, anyway. Gary pointed at the carpet in front of Tim. “That means on all fours, on your elbows, face to the floor and ass high. Spread your legs so that I can get a good look at you.”
Tim groaned. He moved into position, and Gary crossed behind him to get a look at the black rubber plug between Tim’s cheeks. Tim’s asshole looked nice and stretched, glistening with lube. Gary rumbled in delight, his cock throbbing, eager to get inside that sweet entrance.
Amazon link: http://www.amazon.com/New-Hire-Older-Younger-Romance-ebook/dp/B00WTUBBXO/
About the Author:
J.T. Hall has a bachelor degree in Creative Writing and a Master in Education. She has long been active in the LGBT community and does charity work including AIDS education and suicide prevention. She currently works as a technical writer and lives with her partner and teenaged daughter in sunny Arizona.
Links:
Facebook: https://www.facebook.com/profile.php?id=100005608068142
Blog: http://jthallwriting.wordpress.com
Twitter: https://twitter.com/JTHall7
Posted by Unknown at 5:00 AM