When Will I Be Loved by Julie Lynn Hayes 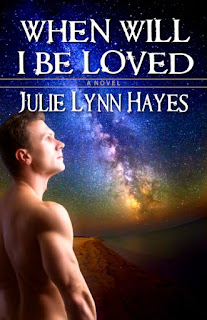 Good morning, and thanks for having me on your blog today!

You ask what makes my story different from the rest. To begin with, I wrote it. Every author puts their own touch on everything, naturally. But of course there’s more to it than that.

I created a town called Crescent Bay in the first book, When Will I See You Again. I never actually give a location, but it’s fairly obvious from the clues I drop that it’s on the west coast, so let’s call it California. Crescent Bay is a prime tourist location, although obviously there are year-round residents as well. I set up a world in which vampires and werewolves are out of the closet, so to speak, and known to exist. So of course that removes the element of secrecy, but allows for more normalcy.

The difference is that the werewolves have SL57 (aka Wolf Tranq) and the vampires have Blut, each of which keeps them under control and allows them to interact safely with society.

I wanted to show my wolves and vamps as being people, as well, not creatures, and not monsters, but very real people, with the same sort of problems that other people have. Falling in love, making a living, having fun, etc.

The first book deals with the pain of loss and surviving it—and dealing with it or not—and touches on the idea of reincarnation. The second book is more about finding the person you’re fated to meet and fall in love with, and then dealing with everything that comes along with that. Making things work out when maybe you’ve jumped into something without knowing all the details, following the dictates of one’s heart.

Besides having to figure that out, Miller and Holt have the fanatics of C.A.U.S.E. to deal with, who are rabidly anti-supernatural and adamant about wanting them permanently taken care of. Plus there seems to be an impending conflict between the wolves and the vamps. Add to that the discovery that someone has brought V Clubs to Crescent Bay—illicit underground nightclubs where vampires illegally drink human blood.

All these things, plus my main characters, Miller Fenwick and Holt Wynne, are just some of the things that make my story different from the rest.

Thanks for having me here today! Have a great day!

Miller Fenwick wants the kind of happy ending his best friend got, with the hunky werewolf of his dreams. Trouble is, there doesn’t seem to be a Prince Charming on the horizon, and casual encounters don’t cut it anymore. Now that Alexx and Raoul are engaged, Miller is becoming resigned to being the bridesmaid, never the bride. But a chance encounter with a sexy stranger at Charisma has his hopes soaring, and his heart is wide open to possibilities.

Holt Wynne is the head of Helios, the largest vampire organization in the country. He’s a very influential and wealthy man, with a deep-seated hatred of werewolves. His running into Miller at Charisma isn’t entirely accidental. He’d meant to wait, but his emotions got the better of him, and he couldn’t stay away. And now see what he’s done…

Wait until Miller finds out he’s sortof just gotten married to the sexy vampire who hates the people who are Miller’s best friends. Sparks are gonna fly—and not just in the bedroom. One thing for sure—life in Crescent Bay is never dull!

Excerpt:
Miller forced himself to take a breath, unaware until he did that he’d stopped breathing.
Quit being ridiculous. Wine going to your head already?
But he’d only had the one glass. And he hadn’t even finished that. He wasn’t such a lightweight, when it came to holding his alcohol, and he knew it.
He told himself it was just his imagination. But just to be safe, he began a slow cautious turn, looking around him, without appearing to be searching for anything—or anyone.
And there he was.

Standing a heartbeat away from Miller was one of the sexiest men he’d ever seen in his life. A man every bit as sexy as Raoul Marchand, although not in the same feral way as the werewolf.
This man was light where Raoul was dark. His hair was a honey blonde which stood out by virtue of being obviously natural, in a place where most blondes were either created by the sun or came from a bottle. He stood a little taller than Miller, exuding a presence that went beyond the merely physical, possessed of the bearing and mien of a veritable god.
But it was his eyes that drew Miller in and held him spellbound. Blue and green, like staring into tropical waves, flecked with bits of pure molten gold. And the way he was staring at Miller was sending the most delicious shivers traveling up and down his spine.
The man took a step toward Miller, his hand outstretched. Before Miller quite realized what had happened, he’d placed his own hand inside of the other man’s, and he found himself being drawn onto the dance floor.

Julie Lynn Hayes first began publishing short stories and poetry in the 1990’s, when it was a different ballgame altogether, and Ebooks hadn’t been dreamed of yet. That changed in 2010 with the acceptance of her first romance novel. She’s come a long way since that first book appeared, and is finding the journey a very educational one.

She lives in St. Louis with her daughter Sarah and her cat Ramesses. She often writes of two men finding true love and happiness in one another’s arms, and is a great believer in the happily ever after. She likes to write in different genres, to stretch herself in order to see what is possible. Her great challenge is to be told something can’t be done—she feels compelled to do it.

When she isn’t writing, she enjoys crafts, such as crocheting and cross stitch, needlepoint and knitting, and she loves to cook, spending time watching the Food Network. Her favorite chef is Geoffrey Zakarian. Her family thinks she’s a bit off, but she doesn’t mind. Marching to the beat of one’s own drummer is a good thing, after all. Her published works can be found at Dreamspinner Press, eXtasy Books, Wayward Ink Press, and Amber Quill Press.

18-Jun
Vampires, Werewolves, and Fairies, Oh My
Wake Up Your Wild Side
Prism Book Alliance

26-Jun
Decadent Delights
All I Want and More Books

1-Jul
Up All Night, Read All Day
Mikky's World of Books


a Rafflecopter giveaway
Posted by Unknown at 7:57 PM

Email ThisBlogThis!Share to TwitterShare to FacebookShare to Pinterest
Labels: Amber Quill Press, Julie Lynn Hayes, When Will I Be Loved