Embracing His Syn by A.E. Via 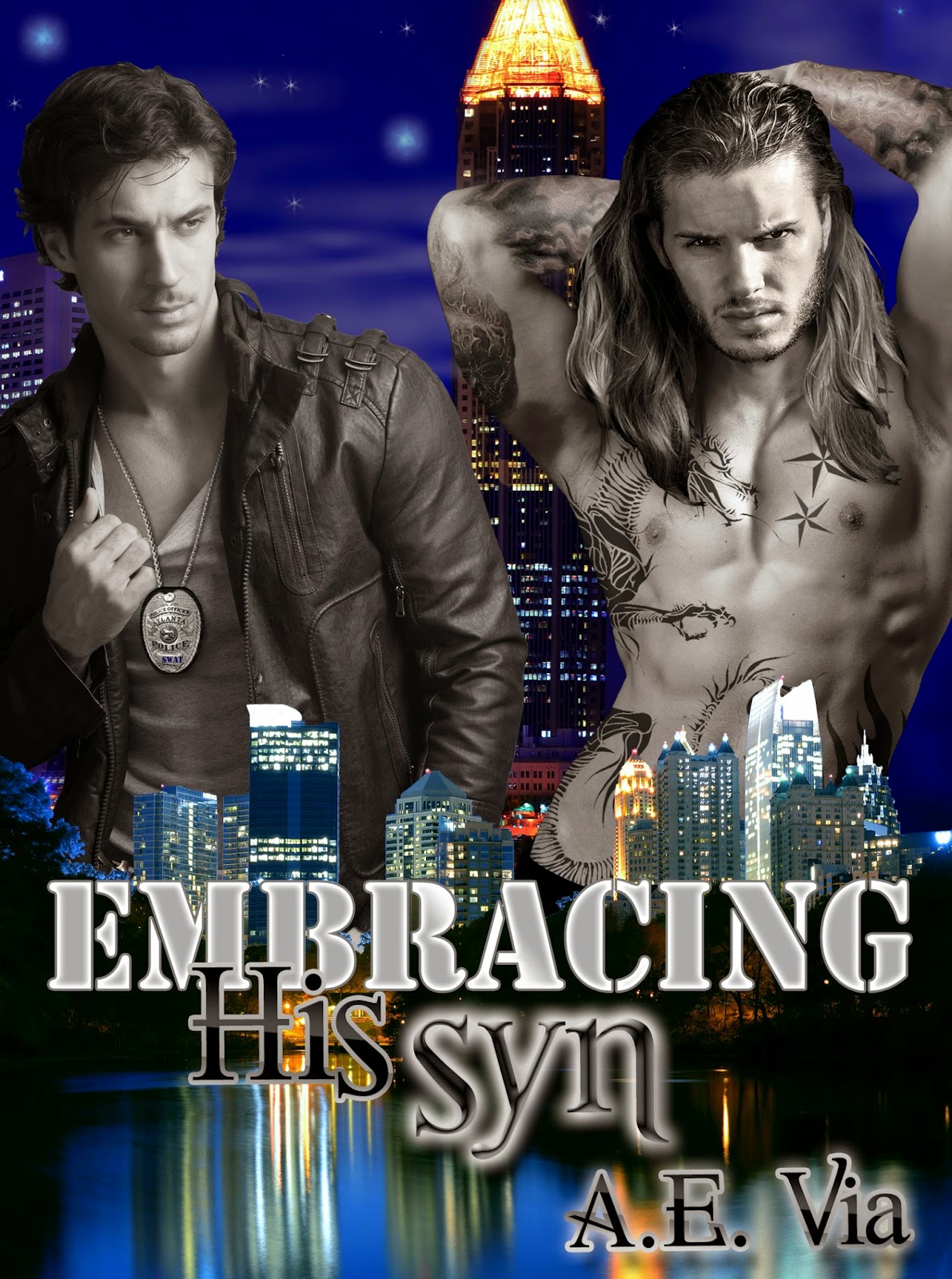 I am so excited to have A.E. Via on the blog today! Here is her latest release, Embracing His Syn.

Synopsis
Sergeant Corbin 'Syn' Sydney had dedicated his life to becoming the best detective. So when he heard there was an opening on the notorious Atlanta Narcotics Task Force, he jumped at the chance. But, what he wasn't ready for was realizing just how lonely he’d made himself, when he observed the loving and dedicated relationship between the two men he served under: Lieutenant Cashel ‘God’ Godfrey and Lieutenant Leonidis Day.
Syn prepared himself to accept his lonely fate until he walked into a small pub and met the long-haired, tattooed bartender, Furious Barkley. Before Syn can even understand why, he’s overcome with feelings he barely recognizes: passion, yearning, craving. And if the dark, lustful gazes are anything to go by, Furious might be feeling the same things for him.
Just two thing needs to happen before Syn and Furi can give each other what’s been missing from their lives for so long... Syn needs to find the evidence that proves Furi’s innocence of murder, as well as protect him from a past that refuses to let go.

God, Day, Ronowski, and Johnson are still as entertaining as ever...

Disclaimer: This book DOES NOT contain polygamous sexual pairings.
Links:

Furi stepped in closer to him and Syn fought his reflex to take a step back. Furi grabbed his wrist and moved him quickly through the customers waiting for the bathrooms and pushed open the back door that led to the parking lot.
Syn quickly took in his surroundings before focusing back on Furi.
“What’s wrong, why’d you bring me back here?”
“What’s your angle, Detective? Why are you lingering around my job and offering me rides, huh?” Furi forced those questions through gritted teeth.
“Why are you angry? It’s just a ride. I was trying to be nice,” Syn said with little conviction, while avoiding answering Furi’s questions. He didn’t have an angle and he wasn’t sure why he was drawn to him. He just wanted to be around this guy, if for nothing else then to at least be friends.
Furi narrowed his eyes again and stepped into Syn’s space. “Are you gay, Detective?”
There it was. The million-dollar question. Was he gay? He’d never asked himself that. He’d only slept with women before, but had never felt anything more for them than an easy friends-with-benefits involvement. Rhodes was the only person that he’d ever felt a connection with. A man. Syn felt his mouth move, but no sound was coming out. Fuck.
Furi looked at him skeptically. “Uh huh. Just like I thought. Who are you working for? Him. He send you? Did he hire you to find me? Are you a private detective?”
That accusation cut through Syn's speechlessness. “Whoa. I work for the city of Atlanta. What are you talking about? Who is him? Is someone after you?” Syn didn’t realize he’d grabbed Furi’s shoulders, forcing him to look into his eyes until Furi threw his arms up and dislodged Syn’s grip.
“Take your goddamn hands off of me! I’m sick of people thinking they can put their fucking hands on me! Stay the fuck away from me, Detective.” Furi shoved past him and reached for the door.
Syn jumped in front of it before Furi could get it open. He yelled right back at Furi, “My name is Syn! I’m not here as a Detective! I don’t know who him is, nor do I work for him.” Syn put up air quotes for the word him. “I just wanted to talk to you!”
“About what?” Furi yelled. They were in each other’s faces, chest bumping each other.
“I don’t fucking know! About you. About me. About the damn Falcons' game last week. About the weather. About why there’s so many goddamn reality TV shows. About what-the-hell-ever! That’s what people do when they want to get to know someone!” Syn stepped back and gripped his hair blowing out a long frustrated breath. He felt so ridiculous, was so annoyed that he was seconds away from just walking away. “Fuck! I didn’t think dating was this damn hard.”
“That’s what you’re trying to do, Detective? Date me?” Furi’s tone and facial expression were full of skepticism. “Because I don’t want to date. Dating is stupid. What the hell is dating anyway? Some long drawn out process of elimination where you both present your best side while hiding the real you, and you can only keep that charade going for about three months because your bullshit and lies eventually leak out and then you have to spend the next three months getting to know each other for real.”
“Geez, man, you are insanely cynical. Do you always over-analyze everything? Why can’t we just–”
Furi cut him off, “Because. I’m only interested in gay men. Not men that might or might not be gay, or men that are looking for an experiment, or men that are fucked up in the head. I’ve been there. Done that, I’m never going there again. It almost cost me my li–”
Syn turned at Furi’s words. He walked back to him slowly. He could see pain in Furi’s eyes and Syn wanted to take it all away. Take all the hurt this man had experienced, and put it on himself, because he could handle it. All he wanted was to see Furi smile, see him uninhibited, full of passion. Full of him. Syn just barely held in his groan. He wanted this damn man. God help him, he did. He let out a slow calming breath and brought his hands up to cup Furi’s cheeks. He wanted to kiss him. Taste him. Feel Furi moan his name into his mouth and swallow it down. Fuck, he wanted that and so much more. Furi was looking hard at him, waiting. His eyes roamed Syn’s face before settling on his lips. Syn needed this; all he had to do was take it. Take it goddamnit.
Furi took it for him. Syn felt confident, sure hands on his own cheeks and soft, beautiful lips against his. Furi took Syn’s control. He knocked his hands down and grabbed the material of his jean jacket, pushing him up against the wall right there behind the pub, and then those lush lips were on him again. Taking him. Syn’s eyes were rolling behind his closed lids. Fuck, it felt so good. He could’ve never imagined how good. 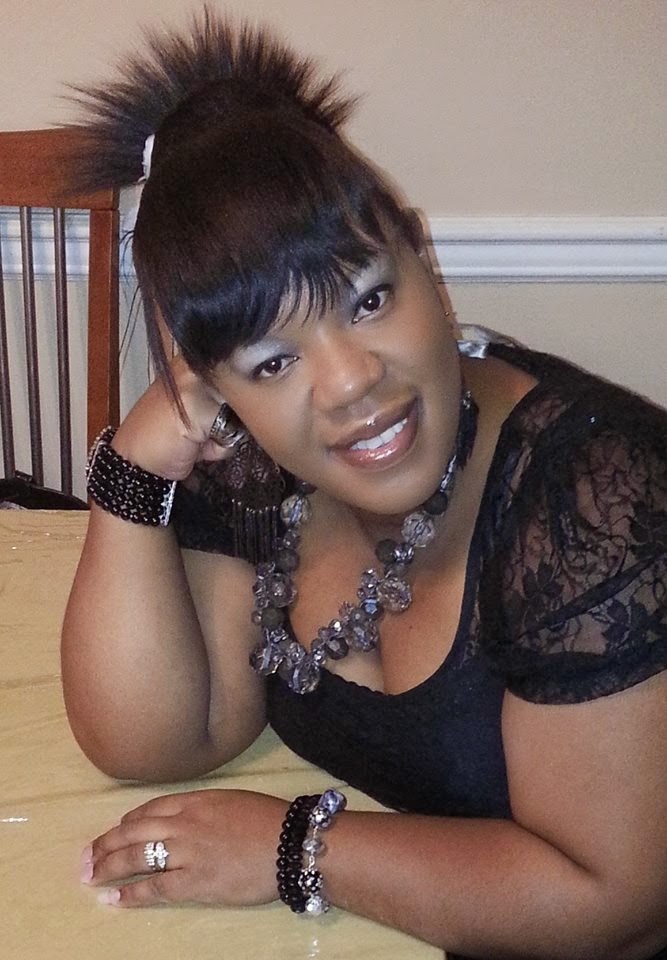 AUTHOR BIO:
A.E. Via is still a fairly new best-selling author in the beautiful gay erotic genre. Her writing embodies everything from spicy to scandalous. Her stories often include intriguing edges and twists that take readers to new, thought-provoking depths.
When she’s not clicking away at her laptop, A.E. runs a very successful paralegal-for-hire business, and in her spare time, she devotes herself to her family—a husband and four children, her two pets, a Maltese dog and her white Siamese cat, ELynn, named after the late, great gay romance author E. Lynn Harris.
While this is only her fourth novel, she has plenty more to come. So sit back and grab a cool drink, because the male on male action is just heating up!
Go to A.E. Via’s official website http://authoraevia.com for more detailed information on how to contact her, follow her, or a sneak peak on upcoming work, free reads, and where she’ll appear next.

Email ThisBlogThis!Share to TwitterShare to FacebookShare to Pinterest
Labels: A.E. Via, Embracing His Syn, Via Star Wings Books