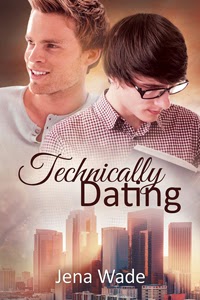 I am excited to host my friend, Jena Wade, and her latest, Technically Dating!

Blurb:
Meek and mild Bruce Collins decides to set aside his life in technical support for the evening and try a wild night on the town. Self-described nerd Bruce meets suave Westley Taylor at a club, but the night doesn’t go as planned. When they run into each other the next day, Bruce is determined to get the details right and finish what they started. Westley is impressed and invites Bruce on date after date. Bruce figures they’re technically dating and might even be in a relationship, until he accidentally overhears a phone message intended for Westley. Every aspect of their time together comes into question. Now, it’s time for Westley to set the facts straight.

Excerpt:
“I’m sorry.” Bruce sighed and cupped Westley’s face with his hands. “Any chance we could postpone this until later?”The temptation to say yes lingered on his lips, but they still had the issue of where they were going to hook up. Mature Westley choose that time to remind him of his responsibilities. “I have to work early tomorrow.” He couldn’t exactly start his walk of shame at his place of work. Though, it was appealing.
Bruce kissed him hard and then smoothed Westley’s swollen lips with the pad of his thumb. “I’m going to dream about these lips tonight.” He stepped back, and Westley felt the loss in the pit of his stomach.
“I’m sorry,” Bruce said.
“Me too.”
Westley stood in the parking lot of the club and watched Bruce walk away. The sound of the club thumped in the background, and the laughter of the partygoers reached his ears, but he ignored it.
Seeing Bruce again was unlikely. If he was staying at the hotel, that meant he wasn’t local.
Loss settled in Westley’s chest when Bruce got into his car and drove out of sight.