The Secrets of Neverwood Anthology 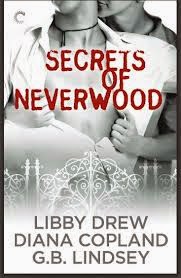 G. B. Lindsey was born and raised in California, where she earned her undergraduate degree in Literature and Creative Writing from UC Santa Cruz. Her first love has always been writing: as a child, she cultivated such diverse goals as becoming "a cowgirl and a writer" or "a paleontologist and a writer." Aside from her salacious and ongoing affair with the horror genre, she loves to write sci-fi, romance, historical fiction, and short stories. Other hobbies include playing the piano, reading voraciously, the occasional period drama movie night, and devouring scary film after scary film. She recently moved back home from Newcastle upon Tyne, where she earned her Master of Arts in Creative Writing, and now lives in Sacramento.

Diana Copland began writing in the seventh grade, when she shamelessly combined elements of Jane Eyre and Dark Shadows to produce an overwrought Gothic tale that earned her an A- in creative writing, thanks entirely to the generosity of her teacher. She wrote for pure enjoyment for the next three decades before discovering LiveJournal and a wonderful group of supportive fanfiction writers, who after gifting her with a "Best New Author" Award encouraged her to try her hand at original gay fiction.  Born and raised in southern California, Diana moved to the Pacific Northwest after losing a beloved spouse to AIDS in 1995. She lives in eastern Washington with four obnoxious cats and her ninety year old Dad, near her two wonderful adult children.

Libby Drew glimpsed her true calling when her first story, an A.A. Milne /Shakespeare crossover, won the grand prize in her elementary school's fiction contest. Her parents explained that writers were quirky, poor, and often talked to themselves in supermarket checkout lines. They implored her to be practical, a request she took to heart for twenty years, earning two degrees, a white-collar job, and an ulcer, before realizing that practical was absolutely no fun.
Today she lives with her husband and four children in an old, impractical house and writes stories about redemption, the supernatural, and love at first sight, all of which do exist. She happens to know from experience.
Libby's STATE OF MIND received rave reviews for being fast, clever, and relentless and was nominated for a Bookie Award for Best M/M Novel of 2011. 40 SOULS TO KEEP, Libby's third novel, has been described as intense and heart-poundingly good and was praised by Publishers Weekly for maintaining a high level of suspense.
An avid supporter of gay rights, Libby donates her time to the Trevor Project and organizations that work to support marriage equality.

Blurb: Three men with vastly different lives are called home to Neverwood, the stately Pacific Northwest mansion of their youth. The one thing they share is a promise to Audrey, the woman they all called mother—that upon her death, they would restore the house and preserve it as a home for troubled boys.
But going home is never easy.
Cal struggles to recover from past heartbreak, while Danny fears his mistakes are too big to overcome. Devon believes he may never break down the barriers that separate him from honest emotion. And a benevolent spirit lingers in Neverwood's halls, intent on guiding her foster sons away from the mistakes of their youth and toward true love.
On the path to brotherhood, they discover the old mansion holds more than dusty furniture and secret passageways. An old mystery stirs up a new danger, one that could cost the men far more than just the house. 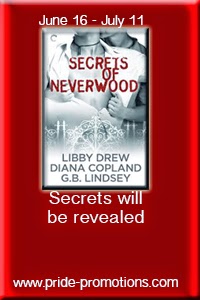