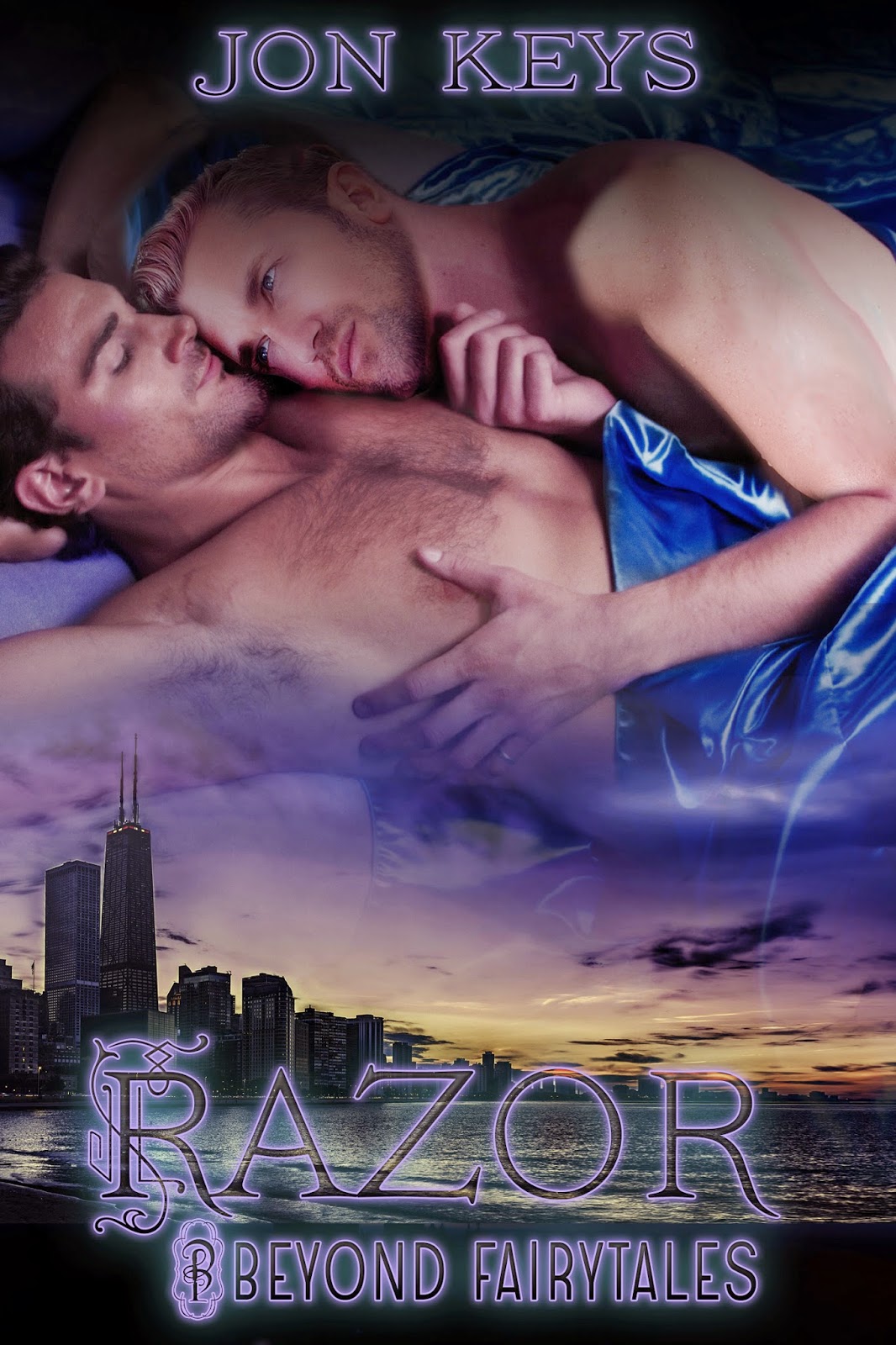 Hey Dean! Thanks for having me today. Razor’s my latest story and was released by Decadent Publishing on Feb 6th. It’s my first urban fantasy and I’m excited to share it with everyone. It’s part of Decadent Publishing’s Beyond Fairytales collection. Razor is a retelling of The Little Folk from Brother’s Grimm. Yeah, I’d never heard of it either. J I hope everyone enjoys Razor as much as I do.
~ Jon ~

blurb
When the world crashes down around your ears, sometimes all you can do is punt and hope for the best. That’s exactly what James and Micah decide to do when one of them is diagnosed with cancer, and the other discovers a serious heart defect. When the doctor tells them to start working on their bucket lists, the two take a trip in an effort to create some good memories, and forget the ugly truths, while they focus on their time in each other’s arms.
Their vacation turns into much more than they anticipated when they find themselves drawn to a club like sailors to a siren. Several sexy waiters, some unforgettable lap dances, and one whip-wielding stud later, they stumble upon the answer to their prayers. Their sex is wild again, and the pair find themselves living for tomorrow. But with every answer comes questions, and Micah’s search for more may destroy them both.
Will they be able to recover from his thirst for the truth? Or will the men always live walking on the edge of a Razor?


Micah made the landing and stood watching James ascend. A few seconds later, he reached the top and looked around. They found themselves outside a door almost as dark as the night, set into a wall of Cimmerian brick that disappeared into the gloom on either side. The doorman standing beside it was equally striking. He stood taller than James’s six feet, and wore only a black leather kilt and heavy boots that seemed to consume the lower part of his muscular legs. No one would dare challenge the man. His torso rippled in ways James had never seen before. His face was rugged, covered with a few days’ scruff trimmed precisely along his jawline. Before he could think of what they should do, the doorman spoke.
“Welcome to Razor. What’s your pleasure tonight?”
James stood speechless as the deep bass of the man’s voice resonated through the night. “The music. The music is wonderful. We caught it from a few blocks off and wanted to hear more.”
A smile emerged on the man’s face and changed him from executioner to guardian. “Of course, the music. You’ve found the right place. Just in time, too. Tonight is drawing to a close.”
He grasped the bronze door pull that was easily as long and thick as James’s forearm and opened the massive door with little apparent effort. He motioned them into the portal with a wave. “Go. Enjoy yourself.”
The pair moved toward the opening and peered inside. The room was dim, except for an empty stage bathed in warm light. James noticed the musical trio creating the instrumentals that had lured them through the foggy night. They glanced back to the grinning bouncer who encouraged them forward with a nod.
They stepped into the room and paused to take it in. From the elaborately carved dark mahogany bar lined with every imaginable type of liqueur, to the lovingly worn floor that had seen thousands of pairs of feet during its existence, it was all club. The couple moved inside as the door closed behind them with scarcely a whisper.
As they studied the room, two things struck James. First, they were the only customers. Second, everyone else in the room wore very little and were male. Their smiling waiter stepped to their table. James swallowed hard as he looked at the man standing before him. He dressed in the same boots as the bouncer, which were buckled to just below his knees. The remainder of the waiter’s clothing consisted of a black leather jockstrap filled to capacity.

Bio:
Jon Keys’ earliest memories revolve around books; with the first ones he can recall reading himself being “The Warlord of Mars” and anything with Tarzan. (The local library wasn’t particularly up to date.) But as puberty set in he started sneaking his mother’s romance magazines and added the world of romance and erotica to his mix of science fiction, fantasy, and comic books.
A voracious reader for almost half a century, Jon has only recently begun creating his own flights of fiction for the entertainment of others. Born in the Southwest and now living in the Midwest, Jon has worked as a ranch hand, teacher, computer tech, roughneck, designer, retail clerk, welder, artist, and, yes, pool boy; with interests ranging from kayaking and hunting to painting and cooking, he draws from a wide range of life experiences to create written works that draw the reader in and wrap them in a good story.
Blog ~ Facebook ~ Twitter
Posted by Unknown at 5:00 AM