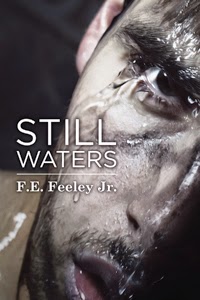 Still Waters was created for a confluence of reasons. Promise, Michigan really represents the modern Gilded Age America has slid into in the past decade.  I really wanted to screw with image in this book. There is this whole world out there so built upon false imagery and it managed to bloat it’s self-importance into this balloon where all one needs to do is scratch at the surface and it pops. It’s a place where aggression and people who wish to keep things the status quo are thinly veiled underneath the surface of fake smiles and anyone is capable of anything.
In the book, a young gay man is found floating lifeless in a pond. His family and his boyfriend are, naturally, devastated and even though the police report says that he committed suicide, none of them believe it.  Five years after the incident, his boyfriend returns to the family and suddenly all hell breaks loose. And of course there is a paranormal element, it wouldn’t be one of my books if there wasn’t.
Our world is sort of going crazy right now. And as a horror writer, I write about what scares me. And the fight in Ferguson, Missouri, thinking we could end up with another Trayvon Martin (God Forbid) or Matthew Shepherd, brought to us by people who are angry that the world around them is changing beyond their control, including police officers, is what inspired this book. From Capitol Hill to Southern State Legislators and City Halls, crazy is on full display right now in ways I’ve never seen.
In regards to the theme of the book. Still Waters is a book about justice. It’s about hope. It’s about the modern American life that is sort of being dangled over oblivion by a spider’s thread. It’s about shattering the gold dipped obnoxiousness that has been in favor of higher truths.
I have a personal rule. I’ll get you to the Happy Ever After. I’ll get you to the light. But you have to go through the dark, first. You have to earn your HEA. And in Still Waters, I make the reader do that. And hopefully, I hit a nerve. Good or bad. I hope I make people angry, I hope I make them laugh, Cry, and know they went on a trip.